Update Required To play the media you will need to either update your browser to a recent version or update your Flash plugin.
Joe DeCapua
July 09,2015


Thousands of migrants and refugees are reported stranded at the border between Greece and Macedonia. Doctors Without Borders says these include many elderly or disabled people, pregnant women and young children.

The medical aid group, also known as MSF, said the migrants and refugees are in shrubby forests near the Greek village of Idomeni. The vast majority have fled violence and conflict in Syria, Afghanistan and Iraq. Some sub-Saharan Africans have also been taking the route through the Balkans to reach other parts of Europe. 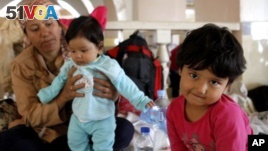 A girl sits with her mother and brother while resting in a mosque in the northern Macedonian city of Kumanovo, June 22, 2015.

“We chose the place because we realized at the end of last year and beginning of this year that a lot of people, who arrive in the Greek islands, coming from Turkey by sea or by land, cross Greece and try to cross into Macedonia. So, they cross Greece by foot and they continue their journey onwards through the Balkans to try to reach their final destination, let’s say, in Western Europe.”

Last week, MSF reported a huge increase in the number of migrants and refugees coming to the village. Theisen gave two reasons for this.

“The number of people arriving in the islands in Greece has increased tremendously over the past month. But [it’s] also linked to the fact that the Macedonian police have reinforced its patrols on the border. So, it’s harder for people to leave Greece and to cross into Macedonia. So, we went from seeing around 300 people every day in our consultations in May to now seeing a thousand, a thousand-500 people staying in the forest there at the border,” she said.

“Also, one of the things we really see a lot at the borders are people with bleeding or wounded feet. And this is directly a result of the fact that they are not allowed to take public or private transportation in the north of Greece close to the border with Macedonia. So, they leave the second biggest town in Greece, which is Thessaloniki in the north. And from there onwards, they have to walk for two days to reach the border,” said Theisen.

It’s a 64-kilometer trek from Thessaloniki to Idomeni.

MSF is providing psychological support as well. Theisen says people have become more agitated and frustrated as Macedonia increases its police presence at the border. Some migrants and refugees say they have been pushed and shouted at by police. Shots have also been fired in the air to frighten people away from the border.

While migrants and refugees have gathered in the forest around the Greek village, Theisen said there’s little for them there.

“People are staying in the forest. There’s nothing in terms of shelter. So, they really sleep outside whatever the weather," she said. "And there’s no provision of food that’s organized, except some solidarity networks from the neighboring villages, organizing from time to time food distributions, clothes distributions and so on.”

Doctors Without Borders is adding to that with blankets, energy bars, hygiene kits and water stations.

MSF also has medical teams in Serbia. Those that make it that far often have scabies and lice.

The group’s project manager in Idomeni Antonis Rigas said, “It’s absurd how people who are fleeing war and violence are forced to risk their lives…in countries that are able to ensure their protection.”

Many of the Syrian refugees are in Turkey and thousands of them are now heading for the Balkans.