Update Required To play the media you will need to either update your browser to a recent version or update your Flash plugin.
Joe DeCapua
June 16,2015


Refugees fleeing war and conflict continue to put a strain on the Greek islands. Tens of thousands have arrived by sea so far this year from Turkey. And a lot more are expected.

“More than 55,000 refugees have arrived in the Greek islands since the beginning of the year. They are arriving in some 10 different islands, but the main ones are Lesvos, Chios, Samos, Leros and Kos. They are all very close to the Turkish coast and in some cases only a couple of nautical miles, which makes it easier for people to cross. And they have been doing so in increasing numbers.”

But the islands do not have the infrastructure to cope with the new arrivals and conditions have deteriorated. 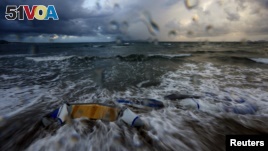 The remains of a dinghy, used by immigrants, is seen during a storm in Kos island, Greece, early May 29, 2015.

About 60 percent of the refugees are from Syria. The rest are mostly from Afghanistan, Iraq and Somalia. Spindler said they do not want to remain on the islands. Instead, the refugees want to get to the mainland and travel to more western European countries, particularly Germany and Sweden. Many have relatives there.

The routes they’re taking are often through the Balkans, particularly Macedonia, Serbia, Hungary and Bulgaria.

“We are very concerned because in many cases they take great risks by going through the mountains, sometimes with the help of smugglers, who, more often than not, exploit them and sometimes prey on them,” he said.

Many are walking along railroad tracks and some are reported to have been injured or killed by passing trains.

Asked why the refugees are traveling to the Greek islands instead of remaining in Turkey, Spindler said, “Turkey is hosting at the moment the largest number of refugees in the world -- more than 1.7 million Syrian refugees, as well as refugees from other countries.”

With no quick end in sight to the wars in Syria and Iraq, the UNHCR is planning for the long-term. But Spindler said the refugee agency is hoping diplomatic efforts can help.

“Many things can be done and should be done. Obviously, renewed diplomatic efforts to try to solve the conflicts in Iraq and Syria are necessary, but these are obviously long term endeavors. In the shorter term, we would like to see legal avenues for refugees, who are in countries such as Turkey, Lebanon and Jordan to be able to come legally to Europe. So they don’t have to take these dangerous journeys and risk their lives.”

He said the situation could be eased by European countries agreeing on a refugee relocation plan.

The refugees arriving on the Greek islands generally are reported in good condition. The boat trip from Turkey to Greece takes just a few hours and is considered much safer than traveling the Mediterranean from Libya to Europe. UNHCR reports no casualties, so far. About 57,000 refugees and migrants have made the Mediterranean journey this year. About 1,800 have died doing so.