Greece Struggles to Cope with Migrants

Update Required To play the media you will need to either update your browser to a recent version or update your Flash plugin.
William Eagle
July 14,2015


For the UN Refugee Agency, the numbers tell the story. One hundred fifty-five thousand migrants have arrived in Greece this year – almost half by sea.

UNHCR spokesperson Laura Padoan says up to a thousand people every day are reaching the islands off the Greek mainland. Most of them come from Syria, Iraq and Afghanistan. Perhaps 10 percent are from Eritrea, Sudan or other countries in East Africa and the Middle East. They leave from 600 kilometers of difficult-to-patrol Turkish coastline for dozens of habitable islands in the Aegean sea.

Padoan – reached on the island of Lesbos – said smugglers charge them up to $12 hundred per person for a small and crowded dinghy to take them to an EU member state. 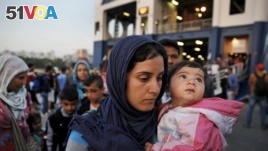 Greek's financial crisis has impaired Athen's ability to handle the growing immigration flows from the Near East, Eurasia and East Africa.

"I’ve spoken to a number of refugees who’ve made the crossing," she said. "One told me that after 20 minutes out at sea at night, water started coming into the boat. They were terrified; it was pitch black. They had to raise the children out of the water to keep them safe. Eventually, the Greek coast guard did come to find them and rescue them."

Today, there are about 70 beds available in the island’s detention center. But more refugees are arriving in Lesbos, capacity is strained, and the system, she says, is buckling.

"There are now about 1,000 people camping outside of the center and the government has designated another alternative site," Padoan explained. "About 3,000 people are camping there with limited services and squalid conditions: running water is limited; toilet facilities are poor, and there needs to be urgent medical assistance as well."

For many arrivals to Lesbos, the next step is a 70 kilometer (50 mile) trek to the nearest port to register with police authorities and apply for asylum. The trip is grueling – especially for pregnant women and children. There are only a few olive trees for shade from the incredible heat, and no place to sleep at night. But the pay-off is worth it: With the proper papers from the first EU country they enter, they may be able to travel to other parts of the European Union.

Padoan said the financial crisis puts some of UNHCR’s programs at risk.

In recent weeks, controls have been placed on the amount of cash that can be withdrawn from Greek banks. She said the agency needs ready access to cash for purchasing locals goods, including food supplies. In some cases, the army has been forced to provide emergency food. Resources on the islands are also stretched when officials are not able to process refugees in a timely manner, and transport them to the mainland.

Humanitarian groups say the country is overwhelmed, and are calling attention to Greece’s need for help.

Amnesty International says Greek efforts to assist the migrants are being hindered by poor planning, ineffective use of EU funds and a hiring freeze.

Philippe Fargues, the director of the Migration Policy Centre in Florence, Italy, says thousands of migrants are passing through Greece without the proper travel documents.

"The government closes its eyes to what happens in first days after irregular migrants reach territory," he said. " They will not take the fingerprints or record these people in real time. "

"It takes a long time to file a claim for asylum and make a decision – six months. So when you have so many people arriving in small places like the Greek islands, what can you do? You don’t have the people to deal with all the claims. So, you let them go," said Fargues.

He said the European Union could consider alternatives – including allowing embassies of EU members in Jordan, Turkey, Lebanon and other states to consider a number of different types of visas for the refugees.

"There are many kinds [of visas] -- work, family reunion, study – that could alleviate the pressure exerted by irregular migrants – because you offer regular way to reach the EU and then put a claim for asylum," he said.

"But so far, states are reluctant to do it, though they may have to. Another possibility is to open safe havens close to conflict areas, but that is long political process. [Also], once people arrive in Greece or Italy, more there could be more solidarity among EU member states to take more….France could take more. But there is not political agreement on this," said Fargues.

The UNHCR is calling for the European Union to ramp up its assistance to Greece and to help resettle the refugees.

The EU says it's committed to helping Greece with the immigration flow, and a few states are considering increasing the number of migrants. But most EU members have rejected a proposed EU quota mandating that they accept a percentage of the refugees. This is particularly true of countries in Eastern Europe or nations with sluggish economies and high unemployment.

The European Asylum Support Office is giving providing Greece with operational support. In a reply to a VOA query, European Commission spokesperson Natasha Bertaud said Athens will receive almost $290 million (260 million euro) for the next five years from the EU’s Asylum, Migration and Integration Fund.

The expenditure will go toward improving living conditions in all reception facilities and screening centers. She said about $1.5 million (1.3 million euro) has been granted to Greece’s asylum service. Bertaud adds that so-called “hotspot teams” will be deployed to Italy and Greece to help them process large numbers of asylum applications.

The EU’s Justice and Home Affairs Council is also discussing commission proposals to relocate 16,000 people in need of protection who are in Greece and other member states. The European Commission stands ready to assist, said Bertaud, if Athens needs more help. So far, she added, no such request has been received.