Update Required To play the media you will need to either update your browser to a recent version or update your Flash plugin.
George Putic
January 18,2016


Large gatherings are usually peaceful but sometimes turn unruly with deadly consequences. Last year’s stampede during the Hajj in Saudi Arabia, for example, left more than 2,000 people dead. Psychologists say understanding how and why crowds sometimes behave as they do, and controlling them, involves recognizing people's capacity for self-regulation.

Saudi authorities say they have spent more than $300 million to improve the safety of pilgrims during the annual visit to the Muslim holy sites, a central tenet of Islam.

But stampedes still happen in Saudi Arabia and elsewhere, so psychologists are trying to understand why and what can be done to prevent them.

Observing groups of undergraduate students, psychologists at the University of Sussex noticed differences in behavior when subjects perceived themselves as individuals sharing only physical space with others, as opposed to sharing some sort of social identity. 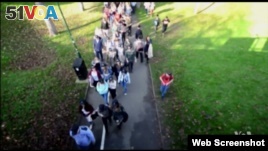 Undergraduate students that share a group identity, walk to a library square on the Sussex campus, while researchers film the event to observe that behavior

“We primed a bunch of undergraduate students to share a group identity and then gave them a task where they had to walk to a library square on the Sussex campus, and we filmed them as they walked under a bridge and then tracked that behavior” Anne Tempelton, PhD student explained. “and we compared that behavior to when they weren't primed at all.”

Students who shared the common identity, such as wearing the same black baseball caps, stayed together, keeping a close formation. Students who did not belong to a group just rushed past each other.

Using the videos, social psychologists at the University of Applied Sciences in Munich created a computer simulation which showed that individuals sharing a common identity move slower and seem to be less susceptible to panic attacks. They may be easier to control because they feel safer when they belong to the same group.

“We got an explanation for that, which is the more that people identify with the crowd, the more they expect social support,” said Dr. John Drury, University of Sussex.

Psychologists say this and other studies point to the importance of having a person who communicates to others within a group, helping them to internalize instructions about which behavior is safe and which is unsafe.