Help Fighting Terrorism on Dhaka Agenda for US Secretary of State

Update Required To play the media you will need to either update your browser to a recent version or update your Flash plugin.
Steve Herman
Aug 27, 2016


Increasingly sophisticated terrorist attacks in Bangladesh have targeted foreigners, secular bloggers and other activists, as well as members of religious minorities. It is a worrying development in a Muslim country known for combining devotion with tolerance.

The government of Prime Minister Sheikh Hasina has blamed the killings on domestic organizations.

“The Sheikh Hasina government has really had a sort of head-in-the sand approach to this,” said Lisa Curtis, senior research fellow at the Heritage Foundation. “This has been going on for a few years, and the government has wanted to, sort of, blame the political opposition rather than admitting to any kind of extremist problem.”

“Whether these influences come from ISIS or al-Qaida, if they ever do come in the future, Bangladesh is ready to fight all these enemies,” Bangladesh's ambassador to the United States, Mohammad Ziauddin told VOA. 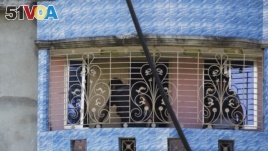 Bangladeshi police inspect a two-story house after a raid in Narayanganj, in the outskirts of Dhaka, Aug. 27, 2016.

Bangladesh, India, the United States and others are constantly exchanging intelligence about terrorism related activities. And that cooperation is credited with halting a number of potential attacks while in the planning stages.

“Through these exchanges of information we have been able to weed out these sleeper cells,” Ziauddin said.

Bangladesh watchers, such as Lisa Curtis, note the developing country grapples with a growing terrorism threat amid an ideological divide between secularists and religious extremists.

“What Secretary Kerry should make clear to Sheikh Hasina is that unless there is political dialogue between the government and the opposition, it's going to make it nearly impossible to develop a national consensus against extremism, which is really what is threatening the country,” said Curtis.

What Kerry publicly says Monday in Dhaka will be closely scrutinized there and abroad to gauge whether the visit is a success in terms of enhanced bilateral cooperation in countering violent extremism.