Update Required To play the media you will need to either update your browser to a recent version or update your Flash plugin.
By VOA
Mar 2, 2018


If there is one thing all armed conflicts have in common, it's that chaos and strife create opportunities for society's less scrupulous citizens, crooks and thieves to enrich themselves by looting.

This has been the case in Libya. Since the beginning of the Libyan civil war in 2011, looters made off with, among other priceless treasures, ancient statuery and collections of old coins, as well as a hoard of Hellenistic and Roman objects called the Benghazi Treasure. They stole from bank vaults and museums, pillaged antiquity displays and archeological sites, keeping the profits for themselves, or using them to finance terrorist activities. 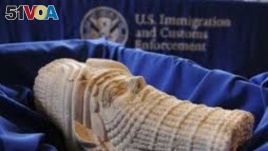 The United States is one of the destination countries for such loot. And that is why the United States and Libya signed in late February, a landmark bilateral Memorandum of Understanding on cultural property protection. The Memorandum will impose import restrictions on categories of archaeological material representing Libya's cultural heritage dating from 12,000 B.C. through 1750 A.D. and Ottoman ethnological material from Libya dating from 1551 to 1911 A.D.

“Heritage sites that are hundreds and thousands of years old, a record of civilization over time, are rapidly being destroyed for financial gain. In the spirit of our close security partnership, the United States and Libya are committed to denying terrorists and transnational criminal groups access to this funding stream,” said Under Secretary for Public Diplomacy and Public Affairs Steven Goldstein at the signing ceremony:

“The goals of cultural property agreements are to reduce the incentive to pillage, to help countries protect their cultural heritage, and increase lawful access to cultural objects and awareness of world heritage by encouraging interchange of materials for scientific, cultural, and educational purposes,” said Under Secretary Goldstein.

The new agreement “demonstrates the joint commitment of the United States and Libya to ensuring that Libya's heritage – of which Libyans are justifiably proud – will be protected and accessible for future generations to enjoy and appreciate.”