Hezbollah Terrorists Wanted by the U.S.

Update Required To play the media you will need to either update your browser to a recent version or update your Flash plugin.
By VOA
Oct 13, 2017


Countering Hezbollah is a top priority for the United States. In a recent briefing, Ambassador-at-Large and Coordinator for Counterterrorism Nathan Sales announced rewards for two senior Hezbollah leaders under the State Department's Rewards for Justice Program.

The United States is offering a reward of up to $7 million for information that leads to the location, arrest, or conviction in any country of Talal Hamiyah. Hamiyah has been linked to several terrorist attacks, hijackings, and kidnappings targeting U.S. citizens. Hamiyah leads Hezbollah's international terrorist unit, the so-called “External Security Organization,” which is responsible for planning and conducting terrorist attacks outside of Lebanon. These attacks have targeted primarily Americans and Israelis. 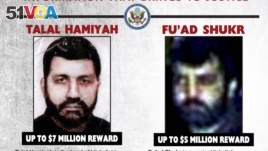 Detail of wanted poster for Talal Hamiyah and Fu'ad Shukr

The U.S. is also offering a reward of up to $5 million for information that leads to the location, arrest, or conviction in any country of Fu'ad Shukr. Shukr is a senior military commander of Hezbollah's forces in Lebanon. He's also a member of the Jihad Council, Hezbollah's highest military body. Shukr plays a key role in Hezbollah's military operations in Syria, and he helped plan and launch the 1983 attack on the U.S. Marine Corps barracks in Beirut that killed 241 Marines.

If you have any information about either of these two men please contact the nearest U.S. embassy or consulate or email info@rewardsforjustice.net. Absolute confidentiality is assured and relocation may be available.

These are the first Hezbollah-related rewards under the Rewards for Justice Program in a decade. “This announcement is just one part of the effort to counter Hezbollah's terrorist activities,” said Ambassador Sales. “Until Hezbollah stops using terrorism and violence to achieve its goals, the United States and our allies will aggressively target its terrorism infrastructure and financial support networks.”