Update Required To play the media you will need to either update your browser to a recent version or update your Flash plugin.
Cindy Saine
December 07,2015


CAPITOL HILL— The United States is increasingly not secure from the threat of terrorist attacks by the Islamic State group, according to Republican House Homeland Security Committee Chairman Michael McCaul.

One day after President Barack Obama went on national television to reassure Americans that the U.S. and its allies will prevail over IS, McCaul delivered a major speech at the National War College, accusing the president of downplaying the severity of the threat IS poses.

The San Bernardino, California, massacre, along with new information that the perpetrators likely were radicalized, has frightened many Americans, who already were unsettled by alleged IS-inspired attacks across the world.

The terrorist group claimed responsibility for major attacks in Paris and a stabbing and shooting in Bangladesh in November, as well as the downing of a Russian airliner over Egypt in late October.

“I’ve had enough. We cannot be blind to the threat before us. ISIS is not contained – it is expanding at a great cost to the free world," he said. "In November, the group managed to conduct three major terrorist attacks on three separate continents in just three weeks."

McCaul said he will introduce new legislation in the coming weeks to boost national security, including a bill this week to tighten security on the U.S. visa waiver program, in an effort to keep terrorists from entering the country. 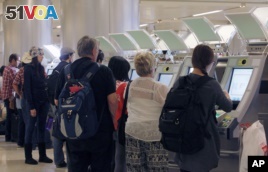 "We will destroy ISIL and any other organization that tries to harm us," he said, referring to an acronym for the Islamist group.

"Our success won’t depend on tough talk, or abandoning our values, or giving into fear. That’s what groups like ISIL are hoping for," the president continued. "Instead, we will prevail by being strong and smart, resilient and relentless, and by drawing upon every aspect of American power."

Response to Obama’s speech has mostly fallen along party lines, with Republican presidential candidates criticizing him and many Democrats praising him.

Independent analyst Seth Jones said Obama said a lot of the right things, but thinks he could be more forthcoming about the difficulties the U.S. is facing.

“But I still think there needs to be a franker recognition that the U.S. is struggling with this issue overseas, and I don’t think he was completely forthright in noting that despite a withering air campaign that the Islamic State continues to hold big chunks in Iraq – including in Anbar province – and in Syria, in Raqqa, they’ve expanded into Libya, Yemen, Somalia, Afghanistan, Pakistan and other locations,” Jones said.

The president again called on Congress to do its part in the fight against IS by holding a vote on an Authorization of the Use of Military Force resolution, for the ongoing operations in Iraq and Syria. But so far Republican leaders have not brought the measure up for a vote.