Update Required To play the media you will need to either update your browser to a recent version or update your Flash plugin.
By Lisa Schlein
12 Aug, 2019


And events marking the 70th anniversary of the 1949 Geneva Conventions are underway, the International Committee of the Red Cross says these four landmark treaties delineating the law of war are as relevant today as they were when they came into force August 12, 1949. Lisa Schlein reports for VOA, from ICRC headquarters in GENEVA. 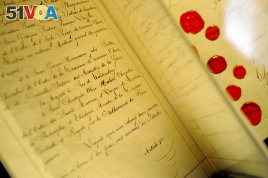 FILE - The original document of the 1st Geneva Convention "for the Amelioration of the Condition of the Wounded in Armies in the Field" signed in 1864 is seen at the International Red Cross and Red Crescent Museum in Geneva, Switzerland.

The 1949 Geneva Conventions grew out of the horrors of World War II. It took only four months for the four treaties, which are universally ratified, to come into force. The treaties contain the core elements of the International Humanitarian Law, the law of war, which aims to reduce suffering in armed conflict.

The law requires all parties to a conflict to abide by provisions that include a prohibition against torture, appropriate treatment of civilians, caring for the wounded on the battlefield, and the dignified treatment of the remains of the dead.

ICRC Director of International Law and Policy, Helen Durham, recognizes the law of war is not always followed, but she notes when they work, they have an impact. She says ICRC delegates in the field see these laws in action every day.

"We see, for example, the capacity for us to get fresh water to six million Syrian. This is the law of war in action. We see every time a wounded combatant passes a checkpoint to get access to medical assistance, it is the laws or war in action," she says.

At the same time, Durham acknowledges the many challenges to the Conventions posed by new technologies. She says issues such as cyber warfare, artificial intelligence, autonomous weapons and the changing nature of conflict present new threats.

When the Conventions were crafted 70 years ago, she says international wars among belligerent states dominated. Now, most wars are internal, civil conflicts. She tells VOA as far back as the 1970s, a survey found a dramatic increase in civilian casualties as a consequence of this change.

"In World War I, I think the statistics are one out of nine people killed was a civilian. In World War II, it was around 50-50. And, then when you looked at the Vietnam and other wars of decolonization, the statistics inversed where up to 90 percent of casualties during conflict were civilians…To date, that continues. So, civilians are very often the major casualties," she says.

Durham says an area of major concern for the ICRC is the treatment of detainees. She says clear rules governing the care of prisoners of war are laid out in the Conventions. However, these frequently are not enforced in the context of civil wars where non-state actors are involved.

She says this is one area where international law must evolve to make the laws of war more relevant to present day existing reality.