Update Required To play the media you will need to either update your browser to a recent version or update your Flash plugin.
By VOA
Jun 16, 2018


The world is getting smaller and more complicated, and it poses a growing number of national security and foreign policy challenges for the United States and its allies and partners.

U.S. security assistance programs are a crucial foreign policy tool to address such challenges. They promote long term relationships, enhance regional security and interoperability with U.S. forces, and strengthen the professionalism of the armed forces of allied and partner nations. 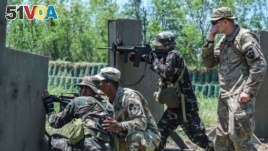 The International Military Education and Training program, or IMET, is one such program, which is overseen by the Department's Bureau of Political-Military Affairs and executed by the Department of Defense. IMET funds the attendance of foreign military and select civilian personnel at U.S. military professional education and training courses offered by Department of Defense institutions of higher learning across the United States.

IMET training also serves as a cultural exchange program by introducing students to key elements of U.S. democracy, such as civilian control of the military, separation of powers, and legislative oversight; and exposing them to U.S. values like free speech, freedom of the press, and commitment to human rights and international law.

Finally, IMET fosters the development of important professional and personal relationships between U.S. officers and mid to senior-level officers in partner militaries, many of whom who go on to fill senior leadership positions in their militaries and governments.

Since 1976, IMET has significantly enhanced the security of both the United States and its partners and created decades-long friendships between course participants. It is another great example of how small but smart investments in global security pay large dividends over time.