Update Required To play the media you will need to either update your browser to a recent version or update your Flash plugin.
By VOA
Nov 7, 2017


In the six and a half years since Syria's civil war began, more than 5 million Syrians have abandoned their homes and fled the country to escape the violence unleashed by Bashar al-Assad's regime against its own people. Today, more than 5 million people have taken refuge in neighboring countries, primarily in Turkey, Lebanon and Jordan.

Currently, Jordan hosts nearly 655,000 Syrian refugees, over 38 percent under the age of 11 years. Due to the brutality of the conflict, thousands of refugees have suffered both physical and psychological trauma. Some have become physically disabled, having sustained severe injuries such as loss of limbs or spinal cord injuries. Others have been mentally and emotionally scarred by the violence around them. 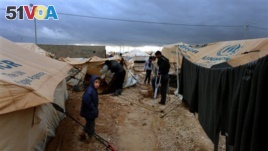 Through a grant from the State Department's Office of Weapons Removal and Abatement in the Bureau of Political-Military Affairs, a U.S. non-profit organization called the Polus Center for Social & Economic Development is partnering with Asia Development Training, Incorporated to build national rehabilitation capacity in Jordan.

The Polus partnership supports the Al Bader Center, the Al Hussein Center, Syria Without Borders, and the Al Salaam Center, which house victims of landmines and unexploded ordnance while they are fitted for a prosthetic and orthotic device. Polus also provides artificial limbs, wheelchairs, and braces, and trains refugees who have lost limbs, to help rehabilitate others. This partnership helps ease their suffering.

"A significant component of the project includes training for refugees who have lost limbs to landmines on how to first heal themselves, and later become skilled rehabilitation professionals capable of helping others. Some of these technicians have already returned to Syria to provide prosthetic services to recently-injured war victims,” wrote Program Manager for Conventional Weapons Destruction Programs in Jordan and Syria, Natalie Wazir in a recent blog post.

“Since 1993 the United States has invested more than $2.9 billion in conventional weapons destruction programs, including survivor assistance, in more than 100 countries. As the world's leading provider of financial and technical assistance for the clearance of explosive remnants of war, the United States looks forward to continued collaboration with our partners in the region.”