In Afghanistan, Demining a Must for Peace and Stability

Update Required To play the media you will need to either update your browser to a recent version or update your Flash plugin.
By VOA
Jun 17, 2017


Afghanistan has known little peace or stability over the past four decades, having suffered through a Russian invasion, a civil war, five years of harsh rule by the fundamentalist Taliban regime, and the United States-led NATO action aimed at dismantling al-Qa'ida and overthrowing the Taliban regime that sheltered the terrorists.

Some 6.2 million people fled the country during the years of upheaval. But once the Taliban had gone, the refugees began to return home. 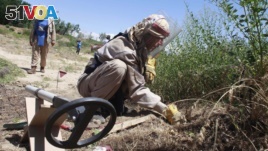 FILE - A de-miner of the Halo Trust, a British charity that specialize in the removal of land mines, searches for mines in Bagram, north of Kabul, Afghanistan.

There is a clear connection between explosive hazards and displacement of populations, and Afghanistan is one of the most heavily mined countries in the world. In some parts of the country, the land is unsafe to farm, unsafe for livestock, unsafe to even walk. Thus, many refugees who returned still could not go back to their homes.

The government of Afghanistan set a goal of clearing the country's known minefields by 2023. Eighty percent of that goal has already been reached. Yet 570 square kilometers has yet to be de-mined.

In late March, over 90 representatives met for the Afghanistan Donor and Implementing Partners Coordination Workshop for Mine Action, jointly hosted by the U.S. Department of State's Office of Weapons Removal and Abatement, and the Afghanistan Ministry for Disaster Management and Humanitarian Affairs, writes Amy O'Halloran, Program Administrative Assistant in the State Department's Office of Weapons Removal and Abatement. The goal was to identify the challenges involved in meeting the Afghan government's 2023 target.

“The United States is proud to support humanitarian mine action in Afghanistan because protecting civilians is a prerequisite for achieving any kind of peace and stability,” said the U.S. Permanent Representative to the Conference on Disarmament, Ambassador Robert Wood. “Men, women, and children must be protected from the risk of landmines and unexploded ordnance. As long as these dangers persist, it is difficult for communities to recover from conflict.”