In Afghanistan, the Enemy Remains the Same

Update Required To play the media you will need to either update your browser to a recent version or update your Flash plugin.
By VOA
Nov 9, 2016


Much has changed in Afghanistan since U.S.-led forces helped topple the Taliban regime fifteen years ago, said Secretary of State John Kerry at a recent conference on Afghanistan:

“Since 2001, maternal mortality in childbirth in Afghanistan has gone down by 75 percent. Average life expectancy has risen from 42 years to 62 years. Access to basic health care has skyrocketed from 9 percent to 67 percent. In 2001, there was only one television station and it was owned by the government. Now, there are 75 stations and all but two are privately owned. Back then, there were virtually no cell phones, zero. Today, there are 18 million cell phones covering about 90 percent of residential areas connecting Afghans to the world.”

Nonetheless, despite many positive changes, the government and people of Afghanistan are still facing the same foe. “Today, the Taliban are again trying to test the Afghan Government's resolve. And Afghan forces continue to bravely repel these challenges,” said Secretary of State Kerry.

There is only one way to end this conflict, and that is through a political settlement negotiated between Taliban fighters and the Afghan Government, said Secretary of State Kerry. Only through peace will Afghanistan achieve lasting stability, and ultimately a full drawdown of international military forces. And the world community fully recognizes what is at stake, he said. 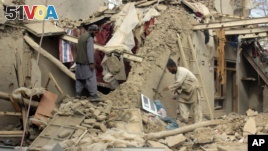 That is why the some 70 countries, including the United States, have pledge a total of $15.2 billion to support Afghanistan through the year 2020. This international support, said President Ghani, will not only help the Afghan government defeat the Taliban insurgency, but also expand its economy, fight corruption and support human rights.

The United States, said Secretary of State Kerry, pledges “to deepen our strategic partnership with Afghanistan and to work with Congress to provide civilian assistance at or very near the current levels, on average, all the way through 2020. That is our financial commitment. And we expect to continue a significant – though gradually declining – level of support as Afghanistan later becomes more self-reliant through the end of the transformation decade.”