In Defense of Democracy

Update Required To play the media you will need to either update your browser to a recent version or update your Flash plugin.
By VOA
Nov 27, 2016


“In contrast to regimes that rule by coercion, democracies are rooted in the consent of the governed – citizens know that there's a path for peaceful change, including the moral force of nonviolence. And that brings a stability that so often can facilitate economic growth.

President Obama also noted that democracies are less likely to fight wars among themselves, and because of their inclusiveness and strength, are more welcoming to refugees and people in need; in addition, that inclusiveness and strength enable democracies to stand up to those who seek to change people's way of life through violence, while at the same time hindering those in power from betraying fundamental democratic values. 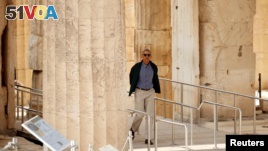 President Obama acknowledged that in a globalized world, where people from a variety of backgrounds try to live together, the practice of democracy can be difficult. But, he emphasized, it is democracy that allows us to bend the arc of history, in Dr. Martin Luther King's words, to justice.