In Georgia, An illegitimate Russian Move

Update Required To play the media you will need to either update your browser to a recent version or update your Flash plugin.
By VOA
Dec 2, 2016

Along with the region of South Ossetia, Abkhazia was recognized by Russia and a very small number of countries loyal to the Kremlin as independent, after Russia invaded Georgia in 2008. Georgia regards the two regions as “occupied.”

Among other provisions, the joint military agreement allows for a Russian military base in Abkhazia, along with motorized rifle battalions, and artillery and aviation groups. Also, in case of a potential threat or war, troops in the united group would be under the command of a leader appointed by the Russian Defense Ministry. 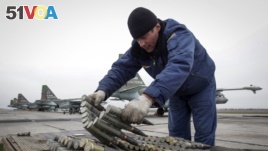 The Ministry of Foreign Affairs of Georgia denounced the agreement, saying “These kinds of provocative steps by the Russian Federation serve the purpose of ultimate annexation of the occupied regions of Georgia, which is a complete disregard of the fundamental principles and norms of international law and undermines the established international order.”

In a written statement, State Department Spokesperson John Kirby said the United States “strongly opposes” the agreement between Russia and the de facto leaders of Georgia's breakaway region of Abkhazia regarding a joint military force.

“We do not recognize the legitimacy of this so-called ‘treaty,' which does not constitute a valid international agreement,” said Mr. Kirby. “The United States' position on Abkhazia and South Ossetia remains clear: these regions are integral parts of Georgia, and we continue to support Georgia's independence, sovereignty, and territorial integrity. Russia,” he declared, “should fulfill all of its commitments under the 2008 ceasefire agreement, withdraw its forces to pre-conflict positions, reverse its recognition of the Georgian regions of South Ossetia and Abkhazia as independent states, and provide free access for humanitarian assistance to these regions.”