In Yemen, A Man-Made Epidemic

Update Required To play the media you will need to either update your browser to a recent version or update your Flash plugin.
By VOA
Aug 28, 2017


Yemen is in the midst of a humanitarian crisis of rare proportions. According to the United Nations, around 17 million people go hungry more often than not, and 21 million are in need of humanitarian aid. Around 2 million Yemeni children are acutely malnourished.

To make matters worse, Yemen is experiencing an outbreak of cholera, possibly the worst in history: some 500,000 people have contracted the disease since late April. About two thousand have already died of it, most of them children under 15 and people over the age of 60. The disease, which is caused by water contaminated with the Vibrio bacterium, is characterized by diarrhea, stomach pains and severe dehydration. 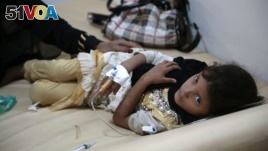 FILE - A girl is treated for suspected cholera infection at a hospital in Sanaa, Yemen, Saturday, Jul. 1, 2017.

Sadly, his humanitarian catastrophe is man-made. Nearly three years ago, war broke out when Houthi militias seized the capital of Sana'a. Within six months, and at the request of the Government of Yemen, a coalition led by the Kingdom of Saudi Arabia began airstrikes on rebel positions to halt their southward expansion. The ongoing conflict has so far killed about 10,000 civilians, displaced millions, damaged public infrastructure, and interrupted the delivery of imports in a country that relies on them to feed its people.

Today, much of Yemen's infrastructure, including roads, hospitals, water storage and delivery, and sanitation systems, has been destroyed. Deteriorating sanitation and lack of access to clean water are largely to blame for the cholera epidemic that is presently killing about one person per hour in Yemen. Nearly all of the ill who receive medical treatment survive the disease. But unfortunately, nearly 15 million of Yemen's population of 27.5 million have no access to basic medical care.

Since the beginning of fiscal year 2017, the United States has contributed well over $467 million to help alleviate the humanitarian disaster in Yemen. Although much of this aid is going toward food and nutrition, a substantial amount has been diverted toward fighting cholera.

We call on our partners around the globe, and the community of nations, to join us with generous donations of food, medicines and funds to help the people of Yemen.