Update Required To play the media you will need to either update your browser to a recent version or update your Flash plugin.
By VOA
Apr 5, 2018

These new designations were proposed in February by the U.S. Mission to coincide with the announcement of the U.S. Treasury Department's largest-ever North Korea sanctions package and are part of a coordinated effort to continue the maximum pressure campaign on the North Korean regime and systematically shut down its maritime smuggling activities. 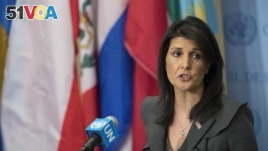 The U.S. Department of “Treasury is aggressively targeting all illicit avenues used by North Korea to evade sanctions, including taking decisive action to block the vessels, shipping companies, and entities across the globe that work on North Korea's behalf,” said Treasury Secretary Steven Mnuchin.

These sanctions, he said, “will significantly hinder the Kim regime's capacity to conduct evasive maritime activities that facilitate illicit coal and fuel transports, and erode its abilities to ship goods through international waters.” President Donald Trump “has made it clear to companies worldwide that if they choose to help fund North Korea's nuclear ambitions, they will not do business with the United States.”

The U.S. thanks its partners and allies for lending their support to these sanctions. It is a clear sign that the international community is united in its efforts to keep up maximum pressure on the North Korean regime, said U.S. Ambassador to the United Nations Nikki Haley. “We want to thank the members of the Security Council, as well as Japan and South Korea, for working with us to keep up the pressure and for their commitment to implementing UN Security Council resolutions and holding violators accountable.”