Update Required To play the media you will need to either update your browser to a recent version or update your Flash plugin.
By Anjana Pasricha
05 March, 2019

Saying that India has not assured the United States that it will provide “equitable and reasonable access” to its markets, U.S. President Donald Trump has directed the U.S. Trade Representative’s office to remove India from a program that grants it preferential trade treatment. 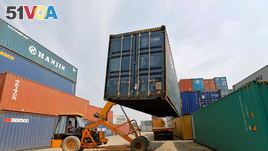 FILE - A mobile crane carries a container at Thar Dry Port in Sanand in the western state of Gujarat, India, Feb. 13, 2017.

In 2017, India was the biggest beneficiary of the Generalized System of Preferences (GSP), which lowers duties on exports from about 120 developing countries.

The Indian commerce secretary told reporters in New Delhi that India has no plans to impose retaliatory tariffs on U.S. goods.

Despite their fast-growing political and security ties, trade tensions have been brewing between the two countries over the past year as American businesses complain of protectionist hurdles in one of the world’s fastest growing markets.

President Trump has called India a “high tariff” country and repeatedly complained of high levies imposed by India on exports such as imported whiskey and Harley-Davidson motorcycles.