India, Southeast Asia to Mark Five Years of Being Polio-free

Update Required To play the media you will need to either update your browser to a recent version or update your Flash plugin.
By Lisa Schlein
25 March, 2019


The World Health Organization says twelve years ago, India alone was responsible for almost 70 percent of all polio cases around the world. It calls India's success against polio one of the most significant achievements in public health.

WHO officials say India's accomplishment proved the crippling disease can be eliminated in even the most challenging circumstances with a strong political commitment.

The number of polio cases has decreased from an estimated 350,000 a year to 33, since the WHO launched its global eradication campaign in 1988. 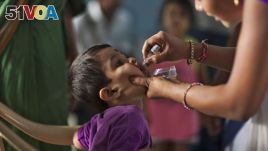 FILE - An Indian medical volunteer administers a dose of polio vaccine to a child in Hyderabad, India, Jan. 29, 2017.

WHO spokesman Christian Lindemeier tells VOA, polio remains endemic in only three countries in two of the organization's six regions. He identifies the countries as Nigeria in the African region and Pakistan and Afghanistan in the eastern Mediterranean region.

"There has been no wild polio virus detected in Africa since 2016, and we are cautiously optimistic that AFRO, our African region, is on the path to certification as well," Lindemeier said. "EMRO, our eastern Mediterranean region, has only those two countries, which have never stopped polio, unfortunately — Afghanistan, Pakistan."

Lindemeier says the countries are considered a joint reservoir of the virus. Therefore, he says, both are getting most of the focus and support from the WHO's polio eradication program. He says tailored and innovative tactics are being put in place to deal with the challenges in each country.

The strategies include identifying, tracking and vaccinating migrant and hard-to-reach populations. He says community workers will be trained to go door to door to find children who haven't been vaccinated and immunize them against polio.

The World Health Organization notes the polio virus does not respect borders. It says polio will not be eradicated until every last child is protected.