Update Required To play the media you will need to either update your browser to a recent version or update your Flash plugin.
Henry Ridgwell
February 26,2016


LONDON— Football’s (soccer's) world governing body FIFA has elected a new president after its former leader, Sepp Blatter, was forced to step down last year after being charged with corruption. New president Gianni Infantino faces a huge task in trying to clean up the body.

Infantino won with a majority in the second round of voting - gaining 115 votes from the representatives of 209 nations. He pledged to rebuild the scandal-hit organization. 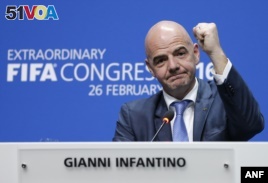 Newly elected FIFA president Gianni Infantino of Switzerland during a press conference after the second election round during the extraordinary FIFA congress in Zurich, Switzerland, Feb. 26, 2016. 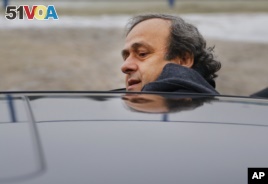 His former boss at UEFA, Michel Platini, was implicated in a $2 million corruption scandal that also swept away the former president of FIFA, Sepp Blatter. Both Platini and Blatter have been banned from football for six years.

That opened the route for Infantino’s shot at the FIFA presidency.

“He has also offered to expand the World Cup to 40 teams. A lot of countries are going to be greatly attracted by the increased prospects of qualifying for the greatest football show on Earth," said Barker.

Hours before the election, FIFA passed a set of reforms aimed at cleaning up its image. It will have an elected council to replace the tarnished Executive Committee – with more female members to boost women’s football.

The salaries of all senior figures will be disclosed.

And the presidency will be limited to a maximum of twelve years. Many believe the reforms don’t go far enough, says Barker.

“Twelve years, there’s still ample time for corrupt practices. Salary disclosure is another one that’s a little bit difficult to pin down. What expenses they take as well as the salary disclosure - that would be a real measure of just how transparent they’re going to be," he said.

U.S. and Swiss prosecutors are still investigating - and the full extent of criminal activity in FIFA is not yet known.

The newly-elected FIFA president is fluent in five languages: Italian, French, German, English and Spanish. He studied law at the University of Fribourg in Switzerland.

Infantino joined UEFA in August 2000 and held various roles and positions before working his way up to secretary general in October 2009.

Before joining UEFA he worked as secretary general of the International Center for Sports Studies at the University of Neuchatel.

Infantino decided to run for FIFA president, after UEFA president Michel Platini was handed a provisional 90-day suspension over a corruption scandal.

He made the announcement on October 26, 2015, after receiving the unanimous backing of the UEFA Executive Committee.

Isabela Cocoli contributed to this report.