More than 2 billion dollars in new money was raised for the people of Iraq at a recent donors' conference jointly hosted by Canada, Germany, Japan, Kuwait, the Netherlands, and the United States. The funds will go towards alleviating the suffering, deprivation, and devastation inflicted on the Iraqi people by ISIL.

In order to address the grave conditions faced by those displaced in Iraq, the international community has committed to providing desperately needed humanitarian aid including food, water, and shelter, as well as stabilization programming to help create the conditions that permit displaced families to return home to liberated areas in safety and in dignity. 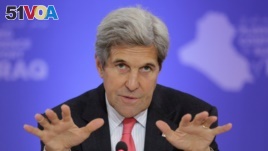 Over $80 million in new pledges for demining efforts in Iraq were secured. This will provide approximately three-quarters of the total amount of funding the United Nations estimates is required for one year of demining activities in Iraq.

The United States was the first major donor at 50 million dollars, to pledge funding to the new United Nations Development Program Funding Facility for Expanded Stabilization. This facility will support activities that will restore critical public services and create jobs in Ninewah, Salah al-Din, Diyala, and Anbar provinces. The United Nations estimates that teaching colleges, hospitals, and universities eligible for these funds will be able to employ an estimated 17,000 to 20,000 people in each of the areas previously devastated by ISIL.

The United States believes long-term stability in Iraq can only be achieved by ensuring that its people are able to return to their homes safely, with access to basic services, healthcare, and education, and hope for economic prosperity.