Update Required To play the media you will need to either update your browser to a recent version or update your Flash plugin.
By VOA
Jun 1, 2018


At the release of the 2017 International Religious Freedom Report, Secretary of State Mike Pompeo called the report “a testament to the United States' historic role in preserving and advocating for religious freedom around the world:”

“Religious freedom is in the American bloodstream.It's what brought the pilgrims here from England. Our founders understood it as our first freedom. That is why they articulated it so clearly in the First Amendment.As James Madison wrote years before he was president or secretary of state: “conscience is the most sacred of all property.”

“Religious freedom,” said Secretary Pompeo, “was vital to America's beginning. Defending it is critical to our future.”

Religious freedom belongs not only to Americans but to every individual around the world. Furthermore, “advancing liberty and religious freedom advances America's interests,” declared Secretary Pompeo:

“Where fundamental freedoms of religion, expression, press, and peaceful assembly are under attack, we find conflict, instability, and terrorism. On the other hand, governments and societies that champion these freedoms are more secure, stable, and peaceful.”

The Trump National Security Strategy clearly states America's commitment to religious liberty: “Our Founders understood religious freedom not as the state's creation, but as the gift of God to every person and a fundamental right for a flourishing society.”

The release of the 2017 International Religious Freedom Report provides the status of religious freedom in nearly 200 countries and territories, and documents reports of violations and abuses committed by governments, terrorist groups, and individuals.

The world has made important strides, but much work remains to be done. In that regard, Secretary Pompeo announced that the United States will host the first ever Ministerial to Advance Religious Freedom at the Department of State on July 25th and 26th of this year. 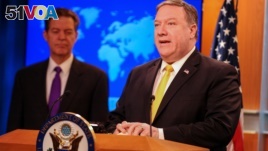 Secretary of State Mike Pompeo and Ambassador-at-Large Sam Brownback at release of annual report on international religious freedom May 29, 2018.

The United States looks forward to identifying concrete ways to push back against persecution and ensure greater respect for religious freedom for all.

“The United States will not stand by as spectators,” vowed Secretary Pompeo. “We will get in the ring and stand in solidarity with every individual who seeks to enjoy their most fundamental of human rights.”