Update Required To play the media you will need to either update your browser to a recent version or update your Flash plugin.
Kane Farabaugh
February 01,2016


DES MOINES, IOWA— It is a routine each Friday at the Masjid Al Noor mosque in Des Moines.

The call to prayer draws hundreds from throughout the city, and the congregation that gathers to worship represents a melting pot of cultures and nationalities.

“It looks like a little United Nations,” says Mohamad Khan, president of the Muslim Community Organization, which oversees the mosque.

Khan came to Des Moines in the 1970s, and the large gathering he’s a part of today is very different from the group he prayed with when he first arrived in the United States. 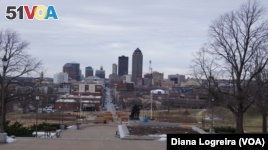 “Our community is more diversified now,” he says.

And it is growing. The American Immigration Council reports U.S. Census figures show Iowa’s foreign-born population rose from 1.6 percent of the total population in 1990 to 4.8 percent in 2013.

It is estimated that immigrants make up as much as 6 percent of Iowa’s population today.

“About 95 percent are probably immigrants here,” says Khan, referencing the congregation of the Masjid Al Noor. “They’re either refugees or just immigrants in some capacity.”

Khan says about three-quarters of those at his mosque, one of six in the larger Des Moines area, are U.S. citizens and eligible to vote.

As the presidential candidates travel the state of Iowa in a last-minute effort to win the support of undecided voters ahead of Monday evening's caucuses, their campaigns are also aware of the small but growing population of immigrant voters.

But Khan says getting them to the polls can be a challenge.

“It’s very difficult to get people to register or to even to vote,” he says, “because many people come from war-torn countries where a lot of times they suffer consequences for supporting one candidate or the other, so they are very scared." 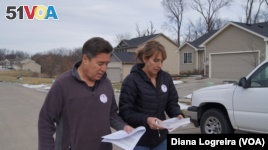 “Maybe in other countries it’s completely different than the way we do it in the United States,” says Mayra De Catalan. She came to the U.S. from El Salvador as an undocumented immigrant in 1992.

De Catalan finally got her U.S. citizenship eight years ago, and Iowa’s caucuses will be her first, thanks to opportunities she’s had to learn about participating in the process.

“There’s been, that I’ve heard of, at least five events to let the Latino community know how to vote, and how to caucus. It’s amazing,” she says. But in order to prepare herself, De Catalan says she also turned to the Internet.

“I took the initiative to look and read on how to caucus as well. I’m definitely more excited about it this time around than the last time around," she said.

“Our Latino community needs to get out on Monday at 7 p.m., sit down for two hours, and caucus,” Henry says.

He leads the effort to encourage that -- a door-to-door campaign for his organization. Volunteers pass out literature and provide information to potential voters, such as making sure they know where to caucus. 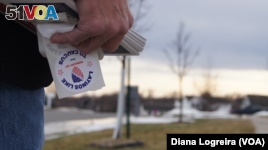 The League of United Latin American Citizens, one of the oldest and largest Latino organizations in the United States, urges immigrants in the community to vote, in Des Moines, Iowa.

“There are 1.9 million registered voters, but only 200,000 participate in the caucuses,” Henry says. “We have 50,000 registered voters within the Latino community. We want to have 10,000-20,000 of our voters to participate. We can play a part with that percentage, with that amount of voters.”

And though the overall immigrant population of Iowa is small, at the Masjid Al Noor mosque Khan is keenly aware they can still make a difference.

"People should not take minorities for granted, because you could lose by one vote," he says.

A vote that could be precious to a candidate locked in a tight race.