Update Required To play the media you will need to either update your browser to a recent version or update your Flash plugin.
By VOA
May 6, 2018


President Donald Trump has said that “other than the vast military power of the United States ...Iran's people are what their leaders fear the most:”

”This is what causes the regime to restrict Internet access, tear down satellite dishes, shoot unarmed student protestors, and imprison political reformers.”

The fear the President spoke about was in evidence again this past week when Iran's judiciary ordered internet providers to block access to Telegram, the popular messaging app used by a reported 40 million Iranians.

State media claimed the move came in response to “complaints against the Telegram social networking app by Iranian citizens, and based on the demand of security organizations to confront the illegal activities of Telegram.”

In fact, Iran's leaders put the ban in place after Telegram founder Pavel Durov refused to accede to their demands to shut down Telegram channels that were used by peaceful protesters. 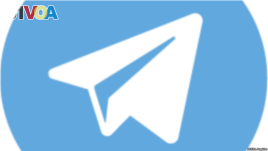 In recent months Iran has seen several peaceful protests, including the large anti-government demonstrations that started in December; the protests throughout the country against the compulsory hijab; and the demonstrations in Ahwaz and other towns in Khuzestan province by members of the Arab minority.

Human Rights monitors have condemned Iran's banning of Telegram. Sarah Leah Whitson, Middle East Director at Human Rights Watch said, “Iran is again stifling access to information to try to make its problems go away, but censorship should never be used to protect leaders from scrutiny.” Hadi Ghaemi, executive director of the Center for Human Rights in Iran, called the ban on Telegram “another example of the state's blatant hostility toward freedom of speech and a futile attempt to block the free flow of information...The only thing Iran has achieved by blocking Telegram is revealing its fear of its own people being able to freely access information and communicate.”

As U.S. Deputy Secretary of State John Sullivan has said, “The right of peaceful assembly and freedoms of association and expression are the legitimate expectation of all individuals worldwide. Unfortunately for the Iranian people, these human rights are under attack almost daily.”

It is past time for the Iranian government to stop violating the Iranian people's human rights, and, as President Trump has challenged it to do, begin serving them instead.