Update Required To play the media you will need to either update your browser to a recent version or update your Flash plugin.
By VOA
Jul 27, 2018


Speaking at the Ronald Reagan Presidential Library in California, Secretary of State Mike Pompeo had a message for the people of Iran who have suffered for almost 40 years under tyranny:

Secretary Pompeo said the fruit of the 1979 Islamic revolution has been bitter for the Iranian people:

Regime leaders, he noted, line their own pockets, while Iranians “cry out for jobs and reform and for opportunity.” He named some of those leaders: head of Iran's judiciary Sadeq Larijani, worth at least $300 million dollars; former IRGC officer and Minister of Interior Sadeq Mahsouli, nicknamed the “Billionaire General;” Grand Ayatollah Makaram Shirazi, known as the “Sultan of Sugar”; Ayatollah Ali Khamenei, whose personal, off-the-books hedge fund is worth $95 billion.

On foreign policy, Secretary Pompeo said, the regime's mission of exporting the revolution has produced a decades-long campaign of ideologically-motivated violence and destabilization abroad, “while the Iranian people shout slogans like “Leave Syria, think about us.”

At home, the “regime's absolute adherence to the Islamic Revolution means it cannot endure any ideas that would contradict or undermine it,” said Secretary Pompeo, which is why it so heartlessly represses its own people's fundamental freedoms. 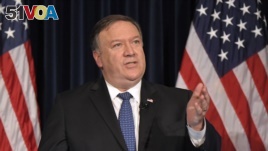 In response to the regime's abuses, Iranians are taking part in the “most enduring and forceful protests since 1979,” Mr. Pompeo declared: “The proud people of Iran are not staying silent...The United States under President Trump will not stay silent either.” The U.S., he promised, will take decisive steps to cut off the funds the regime uses to enrich itself and support death and destruction.

He noted, however, the United States is “willing to talk with the regime in Iran. But relief from American pressure will come only when we see tangible, demonstrated, and sustained shifts in Tehran's policies.”

Ultimately, said Secretary Pompeo, “it is up to the Iranian people to determine the direction of their country;” it is America's fervent hope that “the next 40 years of Iran's history will not be marked by repression and fear – but with freedom and fulfillment for the Iranian people.”