Update Required To play the media you will need to either update your browser to a recent version or update your Flash plugin.
By VOA
Mar 28, 2018


The United States has announced criminal indictments and financial sanctions against Iranian hackers who waged a massive program of cyber intrusions, targeting the computers of hundreds of universities, businesses, and U.S. government and non-governmental organizations on behalf of the Iranian government.

“The defendants worked for an organization known as the Mabna Institute, which two of the defendants founded for the stated purpose of helping Iranian universities access scientific research. Their work consisted of stealing research though illegal computer intrusions . . .The charges included computer fraud, wire fraud, conspiracy, and identity theft.”

U.S. Attorney for the Southern District of New York Geoffrey Berman said the Iranian hackers stole at least 31.5 terabytes of data – over 15 billion pages – from all fields, including science and technology, medicine and engineering – and sent the data back to computers they controlled outside the United States:

“To be clear, this is not just raw data. This is the innovations and intellectual property of some of our country's greatest minds.”

The U.S. Treasury Department has imposed sanctions on on nine Iranian cyber thieves involved in this campaign, and on the Mabna Institute. That means that all property and interests in property of the designated persons subject to U.S. jurisdiction are blocked, and U.S. persons are generally prohibited from engaging in transactions with them. 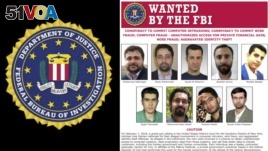 U.S. Attorney Berman said he believes that all the defendants are currently in Iran, but he had a message for them and for others who attempt to harm the United States through such malicious cyber activity:

“We have worked tirelessly to identify you. And you cannot hide behind a keyboard halfway around the world and expect not to be held to account...We will do all we can to bring you to justice.”

While the Iranian defendants remain at large, they are no longer free to travel outside of Iran without fear of being arrested and extradited to the United States. “They cannot leave Iran to conduct business,” Mr. Berman noted. “The only way they can see the rest of the world is through their computer screen, but now stripped of their greatest asset, anonymity.