Update Required To play the media you will need to either update your browser to a recent version or update your Flash plugin.
Mary Alice Salinas
July 05,2015


VIENNA— The deadline for Iran nuclear talks is fast approaching as foreign ministers from the six negotiating powers and Iran meet in Vienna for a final push to reach a comprehensive agreement that limits Tehran nuclear capabilities in exchange for the lifting of sanctions imposed on the Islamic Republic.

After marathon meetings by experts this weekend, some progress is being reported, but much work lies ahead for ministers as they return to the negotiating table.

As foreign ministers returned to Vienna, U.S. Secretary of State John Kerry delivered a clear message about the status of Iran nuclear talks. 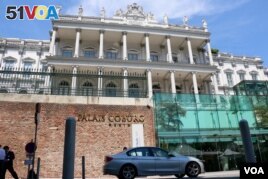 “At this point, this negotiation could go either way.”

Media gathered outside the Coburg Palace where foreign ministers from the six negotiating powers will make a final push to secure a nuclear deal with Iran.

While top diplomats with Iran and the so-called P5+1 nations report progress, they face a formidable job as the July 7 deadline draws near.

“I want to be absolutely clear with everybody, we are not yet where we need to be on several of the most difficult issues,” said Kerry.

The U.S. diplomat’s message stood in contrast to a video recorded by Foreign Minister Mohammad Javad Zarif at the Coburg palace and released on YouTube Thursday.

“At this eleventh hour, despite some differences that remain, we have never been closer to a lasting outcome.”

Progress has been reported in two key areas; the pace of sanctions relief and a probe into whether Tehran’s nuclear activities in the past has involved the development of technology to produce nuclear weapons.

The U.N.’s nuclear watchdog chief, Yukiya Amano, announced he believes the IAEA can complete a probe into the controversial question by the end of the year, with cooperation from Tehran.

As ministers from the U.S., Britain, France, Russia, China and Germany, tackle outstanding issues, Washington remains adamant it will walk if a final deal does not cut Tehran’s potential to build a nuclear weapon.

“If there’s absolute intransigence, an unwillingness to move on things, important things, President [Barack] Obama has always said we would walk away. We want a good agreement. Only a good agreement,” said Kerry.

Negotiators say they are focused on meeting the July 7 deadline, even as key disputes have yet to be resolved.