Iranian Provocations in the Gulf

The United States helps to ensure the free flow of commerce through, among other areas, the strategically important Strait of Hormuz, which connects the Persian Gulf to the Gulf of Oman and the Arabian Sea. Approximately 20 percent the world’s oil –- vital to the global economy -- passes through the Strait.

Recently, there were several incidents of harassment of U.S. Navy vessels in the Gulf by Iran, and these irresponsible actions by Iranian naval forces are causing concern.

At a press briefing, Army General Joseph Votel, head of U.S. Central Command, warned that such episodes have the potential for dangerous escalation. He himself, he said, personally witnessed an instance in July, when the USS New Orleans was transiting the Strait of Hormuz: 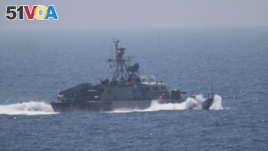 One of the five military vessels from Iran's Revolutionary Guard Corps that approached a U.S. warship hosting one of America's top generals on a day trip through the Strait of Hormuz is pictured in this July 11, 2016 handout photo.

“An IRGC, Iranian Revolutionary Guard Corps missile ship and three fast-attack crafts demonstrated aggressive behavior in the vicinity of our ship. In recent days, we have witnessed even more provocative activity by the IRGC and navy vessels. That type of behavior is very concerning and we hope to see Iran’s naval forces act in a more professional manner.”

General Votel said no other country does what Iran does in the Gulf:

“They don’t go out and they don’t drive fast boats towards military vessels out there in the same way that they do. Nobody else does that.”

General Votel praised U.S. naval forces for their measured response to Iran’s harassment, but he warned that such behavior is dangerous, and called on Iran to be “professional” and act in a responsible manner.

The problem has been created by the attempt on the part of Iran’s leaders “to exert their influence and authority,” General Votel said. This “is not about the Iranian people,” he added. “It’s about the Iranian regime and their desire to continue to do these types of things that stoke instability -- or attempt to stoke instability -- in the region.”