Update Required To play the media you will need to either update your browser to a recent version or update your Flash plugin.
By VOA
Feb 5, 2018


The Secretary of State recently re-designated Iran as one of ten “Countries of Particular Concern” for engaging in or tolerating “systematic, ongoing, [and] egregious violations of religious freedom.” The state of religious freedom in Iran remains extremely poor.

Human rights monitors report that Shamiram Isavi, the wife of Victor Bet Tamraz, who formerly led Iran's Assyrian Pentecostal Church, has been targeted on the basis of her faith and sentenced to five years in prison for supposed “crimes against national security.”

In July, her husband was sentenced to ten years on similar charges. The couple's son, Ramil, has also been accused of so called “national security crimes” because of his faith and his father's ministry. 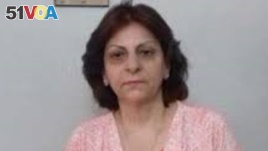 Human rights monitors note that Christian converts are being increasingly targeted in Iran, with at least ten individuals receiving long prison terms over the past year.

The persistent repression of Baha'is in Iran continues as well. The Center for Human Rights in Iran reports that imprisoned Baha'i teacher Azita Rafizadeh was recently told she would be granted furlough from prison only if she repented and apologized for educating Baha'is online. She and her husband, Peyman Koushk-Baghi also a teacher and a member of the Baha'i community, were arrested in 2015, and convicted of national security crimes and of belonging to an “illegal group.”

Baha'is have long been one of the most persecuted minorities in Iran, as a new on-line archive of official documents, news articles, audio recordings, and other primary sources, established by the Baha'i International Community, demonstrates in great detail.

Designating Iran a “Country of Particular Concern” because of the government's ongoing violations of religious freedom demonstrates the importance the United States places on respect for this human right.

As President Donald Trump said in his proclamation on Religious Freedom Day, January 16, “The United States is the paramount champion for religious freedom because we do not believe that conscience rights are only for Americans...We will be undeterred in our commitment to monitor religious persecutions and implement policies that promote religious freedom. Through these efforts we strive for the day when people of all faiths can follow their hearts and worship according to their consciences.”