Update Required To play the media you will need to either update your browser to a recent version or update your Flash plugin.
Joe DeCapua
December 02,2014


HIV, the virus that causes AIDS, frequently mutates. That has allowed the virus to bypass the immune system and infect about 80 million people over the last 35 years. However, researchers say the rapid evolution of HIV actually may be reducing its ability to cause AIDS.

Oxford University Professor Phillip Goulder, the lead scientist in the study, said, “One of the quintessential features of HIV is its ability to mutate and evade the best things we can throw at it, whether its immune responses or antiretroviral drugs. That’s its real strength.”

But HIV is not omnipotent.

“Even HIV has some weaknesses. The fact is there are some parts of the virus that really [don’t] like to change. And one of these regions is the central core that encapsulates the two copies of the viral RNA and the various viral enzymes. That region of the virus can mutate. But if it mutates it usually damages the ability of the virus to multiply, replicate, efficiently,” he said. 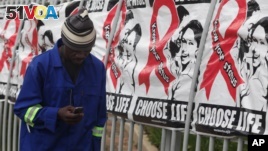 A man makes a call on a mobile phone as he passes past a World AIDS Day banners on the perimeter of an office building in Sandton, Johannesburg, South Africa, Dec. 1, 2014.

RNA is a molecule necessary in the production of proteins that are essential for life.

Goulder said the most effective responses to HIV target the capsid protein. It encloses the virus’ nucleic acid, which allows the transfer of genetic information between different generations of the virus.

HIV’s many mutations take their toll.

“The accumulation of these mutations over time effectively results in a diminution of the ability of the virus to infect cells efficiently and to cause disease. So that’s a good thing,” he said.

HIV, he said, becomes less virulent, losing some ability to cause AIDS through the collapse of the immune system. But could HIV ever reach the point where it mutates into something that does not cause disease?

Goulder said, “It is but speculative to say what’s going to happen in 10 years of tens of decades. If the trend that we’ve seen in the last 10 years in Botswana were to continue – and I see no reason why it shouldn’t – I think the number of people who can control the virus through their immune system would definitely go up – or be expected to go up – and eventually could be some tens of decades down the track – the majority of people.”

The research was based on the HIV-1 strain that typically infects people in southern Africa. Goulder pointed out that another strain of the virus, HIV-2, which occurs in West Africa, causes AIDS in a smaller fraction of people it infects.

“You know, it’s not impossible to see HIV becoming less of a cause of disease. And that’s what you see in the monkeys who are naturally infected with SIV, the relation of HIV, which is where we actually got HIV from. They suffer no disease at all,” he said.

Professor Goulder also said the greater use of antiretroviral drugs appears to affect the virulence of HIV. The drugs may accelerate the evolution of those HIV variations that have a “weaker ability to replicate.”

The findings appear in the journal Proceedings of the National Academy of Sciences. Goulder and his Oxford colleagues worked with scientists from South Africa, Canada and Japan, as well as Harvard University and Microsoft Research.