Update Required To play the media you will need to either update your browser to a recent version or update your Flash plugin.
Jeff Swicord
April 07,2016


Experts say the Islamic State is looting and selling cultural antiquities from Iraq and Syria on an industrial scale. The destruction and sale of these treasures is not only condoned but has been institutionalized within the Islamic State itself. And artifacts are beginning to show up on antiquities markets around the world.

In May 2015, Islamic State fighters seized the ancient Syrian city of Palmyra – a UNESCO world heritage site north of Damascus known for its Greek, Roman, and Persian ruins and archaeological treasures.

Many feared they would destroy the priceless remains.

When Syrian forces recaptured the city last month, they found a few of the famed monuments were destroyed but many of the ancient ruins are still intact - though IS was said to have looted ancient graves around the city. 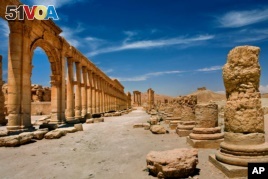 In this undated photo released by the Syrian official news agency SANA, shows the site of the ancient city of Palmyra, Syria.

Experts say one of the reasons for the destruction has to do with the extremist group's rigid interpretation of history.

“They would say they are restoring the true Islam. They are unconcerned with history before Mohammed and they are not too much concerned with accurate history after that," said Professor Daniel Serwer, who is with Johns Hopkins University.

The Islamic State’s interest in the site is far more than religious, says Deborah Lehr, Chairwoman of The Antiquities Coalition in Washington.

Lehr says IS also understands the global propaganda value of destroying a priceless cultural heritage - such as the pillaging of the Mosul Museum in Iraq - making front page news around the world.

“The Mosul Museum under attack and the video that they posted on YouTube has gotten more attention than any other single event," she said.

There's also a monetary motive. The Islamic State has created a ministry of antiquities to “industrialize” the looting and sell the treasures.

“It is going and finding treasure and encouraging people to dig," Lehr said. "And what is unfortunate is that many of these people are not trained archeologists so that we not only lose the treasure, but we lose the whole context in which these are found."

Under international law, destroying cultural antiquities is a war crime. And authorities hope one day they will be able to prosecute Islamic State members for their crimes.