Update Required To play the media you will need to either update your browser to a recent version or update your Flash plugin.
By VOA
Jan 13, 2017


In Iraq and Syria, U.S.-led coalition forces are making progress in the fight against ISIL, including in two crucial areas: killing its leaders, and taking back territory.

The U.S Defense Department announced this month that a Syria-based Islamic State leader, Mahmud al-Isawi died in a coalition airstrike in Raqqa on December 31. Al-Isawi was a long-standing ISIL member who controlled the flow of instructions and finances between ISIL-held areas and ISIL leaders, and provided support to propaganda and intelligence outlets. Al-Isawi was also known to have facilitated trans-regional travel with other ISIL external operations coordinators and had a close relationship with Abd al-Basit al-Iraqi, the emir of ISIL's Middle East attack network, who was killed in a coalition airstrike on November 2, 2016. 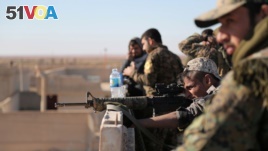 Al-Isawi's death brought the number of significant ISIL leaders killed last year to 16. These losses, as the Defense Department said, have degraded ISIL's trans-regional attack and facilitation network, and are forcing ISIL fighters to increase their focus on internal security.

In a press briefing from Baghdad, U.S. Airforce Colonel John Dorrian, Spokesman for Operation Inherent Resolve, also noted the progress being made in liberating territory from the terrorists.

In Syria, he said, the Syrian Democratic Forces are continuing their advance to isolate Raqqa:

“Since this current phase began on December 9th, the SDF have liberated more than 500 square miles of Syrian land, home to tens of thousands of people who have been brutalized by ISIL's rule.”

In Iraq, Colonel Dorrian noted, Iraqi security forces, with the help of coalition airstrikes and advisers are making progress in their operation to liberate Mosul:

“The city is completely surrounded and the enemy doesn't have the ability to resupply or reinforce their fighters.”

Colonel Dorrian said as difficult and dangerous as the fight for Mosul is and will be, “Time is not on the enemy's side, it's on the side of the Iraqi security forces and they are going to retake Mosul.”

ISIL is a brutal and determined enemy. But the U.S.-led coalition and the local fighters it supports will keep intensifying the pressure until Syria and Iraq are free from ISIL's gruesome grip.