Update Required To play the media you will need to either update your browser to a recent version or update your Flash plugin.
By VOA
Jun 9, 2017


Iran has joined the list of countries targeted within its borders by ISIS.

On June 7, at least 17 people were killed and dozens wounded in twin attacks by gunmen and suicide bombers in Tehran. The first assault occurred at the parliament building; the second at the mausoleum of the founder of the Islamic Republic Ayatollah Ruhollah Khomeini. Reportedly, at least four terrorists, some of whom were disguised as women, were killed by security forces or died by triggering suicide bombs.

ISIS claimed responsibility for the attacks in Tehran, which follow a spate of attacks claimed by the group in recent weeks, including in Egypt and Great Britain. 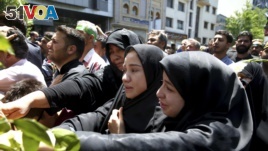 In the aftermath of ISIS' attacks in Tehran, Iranian President Hassan Rouhani called for “unity to fight extremism, violence, and terrorism with regional and international cooperation” – a sentiment that echoes President Donald Trump's call for all nations and communities to work together to drive out and defeat terrorists wherever they exist.

In March 2017, ISIS released a video in Farsi threatening Iran for the first time. Although the Iranian government remains a designated State Sponsor of Terrorism for its funding and training of such terror groups as Hezbollah, Hamas and the Palestinian Jihad, Iran has also been supporting the fight against ISIS in Syria and Iraq. This was the first ISIS claimed terrorist attack in Iran to date.

“We express our condolences to the victims and their families and send thoughts and prayers to the people of Iran,” Ms. Nauert said in a statement. “The depravity of terrorism has no place in a peaceful, civilized world.”