ISIS Must Surrender or Die in W. Mosul

Update Required To play the media you will need to either update your browser to a recent version or update your Flash plugin.
By VOA
Feb 14, 2017


Terrorists with the Islamic State in Iraq and Syria in the western part of Mosul face two options: surrender or die, said the spokesman for the Combined Joint Task Force Operation Inherent Resolve.

In a news briefing from Baghdad, Air Force Colonel John Dorrian said, "The enemy is completely surrounded in West Mosul, and those who do not surrender to the Iraqi security forces will be killed there."

With eastern Mosul liberated, the 16th Iraqi Army Division is maintaining pressure on any remaining ISIS sleeper cells to prevent the terrorists from infiltrating the city again. 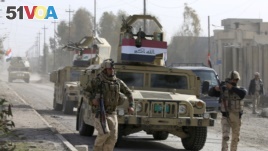 In the Syrian city of al-Bab, since January 1, the coalition has conducted 35 strikes, delivering 101 weapons in or near the city to kill ISIS fighters and to destroy equipment, artillery, fighting positions, tunnels and command-and-control nodes.

Coalition and Turkish military leaders continue coordinating operations around al-Bab. "The enemy, in Al Bab," said Spokesman Dorrian, "is in deep trouble, with Turkish military and partner forces converging on the city from the northwest, coalition forces pounding the enemy from the air, and regime forces approaching from the south."

Meanwhile, the coalition continues to fight ISIS on multiple fronts. "Our commitment to completely destroying ISI[S]," said Colonel Dorrian, "means that we must destroy their ability to communicate with leadership, their financial network and their ability to control terrain."