Update Required To play the media you will need to either update your browser to a recent version or update your Flash plugin.
By Henry Ridgwell
Dec 8, 2016
LONDON —

Italy is gearing up for possible fresh elections following the resignation of Prime Minister Matteo Renzi after the "no" vote in a referendum on constitutional change. Economic and political factors drove voters to punish Renzi, but analysts say Italy's migrant crisis also played a role, and the issue is likely to feature in forthcoming election campaigns.

More than 176,000 migrants are being housed in reception centers spread across Italy, and prior to his loss in a referendum Sunday, outgoing Prime Minister Matteo Renzi threatened to veto the EU budget in a bid to force Europe to share Italy's burden. 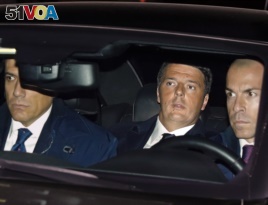 Renzi said, "The international scene is in chaos and Europe is struggling," adding the countries most recently brought into the European bloc are those that dream of building walls.

The appeal was too little, too late, says Eurasia Group analyst Riccardo Fabiani.

“Many people think he was too weak towards Europe and particularly northern Europe. There was a perception in Italy the government should have been harsher with Germany, and with the migrants as well,” said Fabiani.

Every day, hundreds, sometimes thousands, more migrants arrive on Italy's southern shores. By far, the majority comes from Libya, where the political chaos allows people smugglers to profit from the endless human cargo.

Europe supports the internationally recognized Libyan national unity government; but, that support has failed to stem the flow of migrants, says Fabiani.

“Supporting the national unity government, which is weak, divided and has been very ineffective so far, is at odds with the idea of having a deal with a strong authority, a strong government in Libya which is able to stem the flow of migrants,” said Fabiani.

“Haftar in their minds is the [Egyptian President] 'General Sissi' type of leader that they can have a deal on the migrant crisis with,” said Fabiani. "So definitely there are some parties that will try to exploit this issue.”

The onset of winter is not deterring migrants. Doctors Without Borders field coordinator Ferry Schippers spoke to VOA via Skype from the rescue vessel "Aquarius," which it operates with the charity SOS Mediterranean.

“The seas are higher, there is more rain, it is cold, and I am a bit amazed because the people keep on coming," said Schippers. "We are doing a job that we should not be doing. I mean, the solution should come from a different party. And we are there because obviously there is not enough being done.”

Doctors Without Borders says nearly 5,000 people have died this year on the crossing, and Italy and Europe have yet to find a solution.