Update Required To play the media you will need to either update your browser to a recent version or update your Flash plugin.
Emilie Iob
October 21,2015


ABIDJAN, IVORY COAST— The election campaign is in full-swing in Abidjan, Ivory Coast's biggest city. On Sunday, more than 6 million voters are expected to go to the polls to choose their next leader.

Incumbent President Alassane Ouattara, running for his second five-year term, is widely seen as the frontrunner. He’s supported by the Democratic Party of Ivory Coast (PDCI), one of the country's biggest political parties, and boasts of a fast-growing economy during his tenure.

Tahirou Ouattara says he supports Ouattara because of what he did for the country over the past five years. 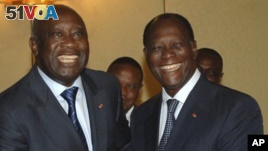 "He built a third bridge in Abidjan, he gave Ivory Coast drinkable water, electricity and social security," said Ouattara, a backer of the Rally of the Houphouetists for Democracy and Peace (RHDP) party. "He also made roads."

The poll is crucial for the country after post-election violence five years ago left at least 3,000 people dead.

Supporters of Ouattara and then-President Laurent Gbagbo fought each other for months, when Gbagbo refused to step down after losing the 2010 contest. Gbagbo eventually was toppled, arrested and now awaits trial at the International Criminal Court.

Gbagbo's party, the Ivorian Popular Front, or FPI, is more divided than ever. Former minister Pascal Affi N'Guessan is the party's official candidate, but the ghost of Gbagbo is on everybody's lips.

"What made me support him is that he said he wants to get Gbagbo, [former first lady] Simone Gbagbo and Blé Goudé out of jail," said FPI supporter Emmanuel Flan-Tiety. Goudé, a Gbagbo ally, also faces war crimes charges.

But from his cell in the ICC, Laurent Gbagbo said he was not endorsing any candidates.

Other candidates include former Prime Minister Charles Konan Banny. For weeks, his National Coalition for Change (CNC) has been repeating that conditions for free and fair elections have not been met, and that the electoral commission is biased toward Ouattara.

On Tuesday, he tackled the list of registered voters, giving some examples of alleged irregularities.

"This list contains 'doublons'” or double listings, Banny said. “I maintain my claim, I confirm it."

Two other candidates have pulled out of the election, also accusing the electoral commission of bias.

The commission has said its priority is "calm elections."