Update Required To play the media you will need to either update your browser to a recent version or update your Flash plugin.
Emilie Iob
July 05,2016


ABIDJAN— It is the home stretch for three Ivorian taekwondo athletes. The Rio Summer Games are just weeks away, and Ivory Coast has won only one Olympic medal in its history. That was 32 years ago.

Track and field is still the top category for African Olympians, but Asian martial arts are gaining ground — especially in West Africa.

In all, African nations are sending more than 50 athletes to compete in taekwondo and judo this year.

"We are very confident. … Our athletes are mature," said Attada Tadjou, technical director of the Ivorian Taekwondo federation. "They are on a par with the best in the world." 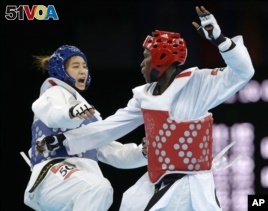 Ruth Gbagbi, competed in the 2012 Olympics, and has won gold in her category at the African Taekwondo Championships. She also won a gold medal at last year's African Games.

"Government support is coming along gradually, as the athletes’ success grows. But the public,” she said, “yes, we have a lot of fans who approach us, who encourage us. Ivorians are motivated.”

"It's my parents put me down for it. They saw that I didn't know how to defend myself and I was withdrawn because of that," Ange-Emmanuel Koffi said.

Part-time coach Ibrahima Soumahoro says the image of the sport has evolved over time.

"We used to think of martial arts practitioners as thugs who assault people," Soumahoro said. "Now, taekwondo is an Olympic sport. It's taught in schools and universities. It is practiced by an elite."

And the kids say, they will be watching the national team compete in Rio.

"They are examples to follow because they are champions, and they come from Ivory Coast so it encourages us to continue taekwondo," he said.

Rio will be the first Olympic Games for national team members Mamina Koné and Cheick Cissé.

Cissé says part of their motivation for bringing home a medal is to help smooth the way for the next generation of African athletes.

Taekwondo has been an Olympic sport since 2000, but only three Africans have won medals in the event.