Update Required To play the media you will need to either update your browser to a recent version or update your Flash plugin.
By VOA
Mar 15, 2017

This executive order places a 90-day ban on the issuance of new visas for citizens of six nations. They include Libya, Iran, Somalia, Syria, Sudan, and Yemen. “Three of these [Iran, Sudan, and Syria] are state sponsors of terrorism,” said U.S. Attorney General Jeff Sessions. “The other three have served as safe havens for terrorists, countries where the government has lost control of territory to terrorists groups like ISIS or al-Qaida and its affiliates. This increases the risk,” said Attorney General Sessions, “that people admitted here from these countries may belong to terrorist groups, or may have been radicalized by them.” 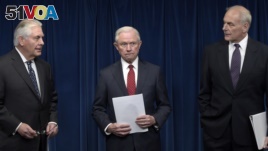 In addition, the United States' refugee program will be suspended for 120 days, and the United States will not accept more than 50,000 refugees in this fiscal year. The revised order explicitly exempts legal permanent residents and those who already have a valid visa to come to the U.S., among others. The revised executive order will go into effect March 16.

Speaking to America's allies and partners around the world, Secretary Tillerson stated that “this order is part of our ongoing efforts to eliminate vulnerabilities that radical Islamist terrorists can and will exploit for destructive ends. The State Department will coordinate with other federal agencies and implement these temporary restrictions in an orderly manner.”

“The State Department will implement the provisions in this [executive] order that allow for the admissions of refugees when it is determined they do not pose a risk to the security or welfare of the United States,” said Secretary Tillerson.

“We cannot compromise out nation's security by allowing visitors entry when their own governments are unable or unwilling to provide the information we need to vet them responsibly,” said Attorney General Sessions. “This executive order provides a needed pause, so we can carefully review how we scrutinize people coming here from these countries of concern.”