Keeping the Pressure on North Korea

Update Required To play the media you will need to either update your browser to a recent version or update your Flash plugin.
By VOA
Jan 23, 2018


A campaign of maximum pressure is essential to resolving the North Korean nuclear threat through diplomatic means, said Secretary of State Rex Tillerson at the Foreign Ministers' Meeting on Security and Stability on the Korean Peninsula.

“Our nations,” said Mr. Tillerson, “repeated a unified message that we have sent the regime before: We will not accept a nuclear-armed North Korea. All of us share one policy and one goal, and that is the complete, verifiable, and irreversible denuclearization of the Korean Peninsula.”

Secretary Tillerson stressed that the United States' “common cause with others in the region, most particularly China and Russia, will remain intact despite North Korea's frequent attempts to divide us and sow dissension.” It remains critical for UN member-states, especially China and Russia, to fully implement agreed-upon sanctions. 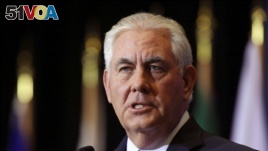 FILE - U.S. Secretary of State Rex Tillerson speaks at a news conference during the Foreign Ministers' Meeting on Security and Stability on the Korean Peninsula in Vancouver, British Columbia, Canada, Jan. 16, 2018.

The U.S. and its partners discussed ways to counter sanctions evasion and smuggling, including a call to action to strengthen global maritime interdiction operations to foil the illicit ship-to-ship transfers. The U.S. will continue to press for tighter U.N. sanctions on North Korea should there be subsequent provocations.

The goal of the maximum pressure campaign is and always has been to move North Korea towards credible negotiations on denuclearization.

But productive negotiations, cautioned Secretary Tillerson, “require a credible negotiating partner. North Korea has not yet shown themselves to be that credible partner. . . .North Koreans know our channels are open, and they know where to find us. But a sustained cessation of North Korea's threatening behavior is. . .a necessary indicator of whether the regime is truly ready to pursue a peaceful, diplomatic resolution to the security threat that it has created.”

The international community must remain united on sustaining pressure on North Korea until it takes concrete steps toward denuclearization.