Update Required To play the media you will need to either update your browser to a recent version or update your Flash plugin.
Henry Ridgwell
December 03,2015


LONDON— U.S. Secretary of State John Kerry met his Russian counterpart in Belgrade Thursday amid tensions over NATO’s invitation to Montenegro to join the alliance. The ongoing battle against Islamic State dominated the annual summit of the Organization for Security and Cooperation in Europe.

Speaking at the OSCE summit in Belgrade, Secretary of State John Kerry said the air campaign against Islamic State, also known as Daesh, was only one part of the strategy – and there was more work to be done.

“I think we know it, that without the ability to find some ground forces that are prepared to take on Daesh, this will not be won completely from the air,” said Kerry. 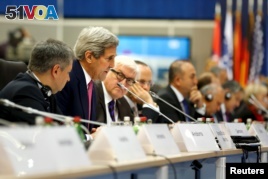 The foreign ministers of Russia and Turkey met for the first time since the downing of a Russian jet by Turkish forces. Moscow has warned that Ankara will ‘regret’ the incident.

“The decision to invite Montenegro is not directed against anyone; it is for our shared security,” he said.

Tensions over Russia’s intervention in Ukraine have likely expedited NATO’s invitation to Montenegro, saidTim Judah, Balkans correspondent for The Economist.

“It still has problems of corruption and organized crime, the judiciary etcetera, but I think geopolitics has played a role here," said Judah. "If it hadn’t have been for [Russia’s intervention in] Ukraine maybe Montenegro wouldn’t have made the grade.”

Meanwhile, on his first trip to Kosovo Wednesday as secretary of state, Kerry sought to calm the worsening political storm.

In recent weeks, opposition lawmakers have repeatedly set off tear gas inside Kosovo’s parliament — in protest at the government signing a European Union-brokered deal to improve ties with Serbia and offer more rights to the Serb local minority.

Kerry said the deal would be good for Kosovo.

“Make no mistake," he warned. "We would not support any agreement that would threaten the sovereignty, or the security, or the independence of Kosovo."

Kerry also conveyed U.S. concern over Islamic radicalization. Dozens of Kosovars are believed to have traveled to Syria to fight for Islamic State.