Kerry on U.S. Successes in Africa

Update Required To play the media you will need to either update your browser to a recent version or update your Flash plugin.
By VOA
Jan 14, 2017


In a recent press conference, U.S. Secretary of State John Kerry made clear that the United States has been more deeply engaged in more places to greater effect than at any time in American history. This is especially true of Africa:

“We have worked long and hard with country after country [in Africa], with governments and civil society every single day to combat hunger, to increase digital access, to train the leaders of tomorrow,” said Secretary Kerry. One of the most enduring efforts of President Barack Obama may be the Young Leaders Initiatives, and particularly the Young African Leaders Initiative.

In Nigeria, the United States took the lead in helping the country through a difficult election process and in the fight against the terrorist group Boko Haram. “We've helped the Somalians fight back against al-Shabaab. We have worked diligently to promote peace in South Sudan and worked with the region to try to bring people together and turn away from the potential of challenged and failing governments,” said Secretary Kerry.

The U.S. has helped push back against any number of violent extremist groups, including most recently supporting the Libyans in their fight against Daesh in Sirte, Libya. 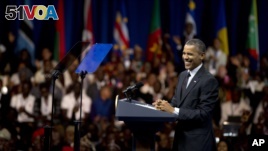 Together with its international partners, the United States led the fight to assist countries battling against Ebola, stopping the spread of the disease in its tracks. “It wasn't easy,” said Secretary Kerry. But President Obama made the daring choice of sending some 3,000 or so American troops there to build capacity so the U.S. could deliver health care, along with the French and British. As a result, hundreds of thousands of people whom it was predicted would die by Christmas of two years ago, were saved.

And through the President's Emergency Plan for AIDS Relief, the U.S. has brought the world to the threshold of the first AIDS-free generation in 30 years.

In the years ahead, the U.S. will continue its mission in Africa and around the world of advocating on behalf of democratic values, human rights, including the freedom of the press; and contributing to the global goals of stability, prosperity, and peace.