Update Required To play the media you will need to either update your browser to a recent version or update your Flash plugin.
George Putic
May 07,2016


The mirror of the Hubble Space Telescope that gave the world stunning pictures of deep space is about 4.5 square meters.

Compare that with the primary mirror of the James Webb Space Telescope, which will be 25 square meters — and which is creating big expectations for even higher-quality results when it is deployed in 2018.

But both will be dwarfed by the Giant Magellan Telescope, which is under construction in Chile's Atacama Desert. Its mirror array covers about 368 square meters. 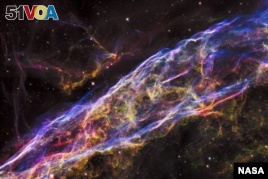 FILE - NASA's Hubble Space Telescope unveiled in stunning detail a small section of the expanding remains of a massive star that exploded about 8,000 years ago.

By looking at different parts of the visible and infrared spectrums, the two new telescopes will complement each other, Magellan Telescope director Patrick McCarthy said.

"The two working together, I think, will give us a complete picture, whether we are looking at planets around nearby stars, black holes in the centers of other galaxies, or back to that early universe that we call the First Light, when we see the first stars in the first galaxies," McCarthy said.

To isolate it from vibrations, the 1,200-ton telescope will rest on an oil flotation bearing system, completely free of any friction. A range of cameras and spectrographs will record and dissect the received light, looking for signatures of atoms and molecules. And the light coming from billions of kilometers away may be impossibly faint.

"The photons come in once every 15 to 20 minutes, so it takes a long time to collect that light,” McCarthy said. “In our case, we think we'll get a few photons a minute, but you need hundreds to get a good signal, so it just takes patience."

But with a telescope sensitive enough to detect a birthday candle on the moon, nobody knows what to expect.

"The most important is the unexpected,” McCarthy said. “The new discoveries, the unanticipated breakthroughs. That's always been the story of astronomy. When you build a new capability, young people find things that either no one expected, or they prove that their elders were wrong."

The $1 billion joint project of the U.S., Australia, Brazil, South Korea and Chile is expected to open for the first observations by 2022 and be fully operational by 2026.