Update Required To play the media you will need to either update your browser to a recent version or update your Flash plugin.
By VOA
Jun 12, 2017

The importance of Raqqa cannot be overstated. ISIS captured the city in 2013, and a year later declared Raqqa to be its capital in Syria. The assault on the city begins just as Iraqi forces, with support from the U.S.-led, anti-ISIS combined joint task force, make the final push of a six-month long campaign to clear the last ISIS forces out of Mosul, the group's Iraqi capital. The loss of either city would be a hard blow to the terrorists. Now they are faced with the probability of losing both. 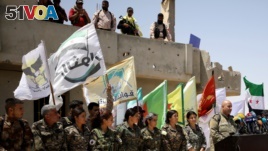 Indeed, the Syrian Democratic Forces and the U.S.-led anti-ISIS combined joint task force have been preparing the ground for the assault on Raqqa for many months, ensuring the best possible conditions for the attacking forces. With the support of countless bombing raids by the joint task force, the Syrian Democratic Forces and Syrian Arab Coalition have seized control of the terrain north of the Euphrates River and the strategically important town of Tabqa.

In the meantime, in anticipation of the attack on Raqqa, the anti-ISIS combined joined task force has been conducting air raids on ISIS targets within and around the town. On the day before the assault began, 24 air strikes hit over a dozen groups of fighters, destroying equipment, booby traps such as houses rigged with explosives, and a weapons storage facility.

The fight for Raqqa will be long and difficult, and it will not be the last. But the offensive will deliver a decisive blow to the idea of ISIS as a physical caliphate, said commander of the U.S.-led coalition battling ISIS, General Steve Townsend.

“The International Coalition and our partner forces are steadily dismantling the physical caliphate of ISIS.Once ISIS is defeated in both Mosul and Raqqa, there will still be a lot of hard fighting ahead, but this Coalition is strong and committed to the complete annihilation of ISIS in both Iraq and Syria.”