Update Required To play the media you will need to either update your browser to a recent version or update your Flash plugin.
Joe DeCapua
January 29,2015


New research shows that dogs are no longer the primary source of a disease that has infected and killed lions in Tanzania. Canine distemper now appears to be spread mostly by other carnivores, such as hyenas, jackals and foxes.

In 1994, about 30 percent of the lions in Serengeti National Park died from – what was then – a mysterious neurological disease. It was later identified as canine distemper.

Veterinarian Felix Lankester said that “the dynamics of the distemper virus are extremely complex….Canine distemper is an infectious disease that’s caused by a virus called the canine distemper virus, which is in the same family as measles and rinderpest. So it’s a viral infection that affects dogs, commonly, but it can also infect wild carnivore species.”

In the ’94 outbreak, domestic dogs were responsible. 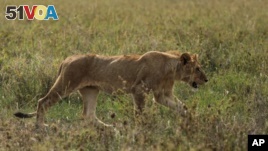 In this photo taken Saturday, Jan. 17, 2015, a lion walks in Serengeti National Park, west of Arusha, northern Tanzania. The park is the oldest and most popular national park in Tanzania and is known for its annual migration of millions of wildebeests, zebras and gazelles. (AP Photo/Mosa'ab Elshamy)

“There are lots of domestic dogs living in human communities around the national park. And there’s one particular area in the northwest of the national park where there’s a lot of people and quite a high density of dogs,” he said.

Since then, blood samples of various animals have been tested for signs of canine distemper.

However, the antibody peak in lions did not correspond to a peak in domestic dogs. So, the dogs were not the primary source.

“Social contact within a social group, like a lion or domestic dog bite -- dogs licking each other or grooming each other, fighting, mating. But it’s also spread from species to species we think at points of contact like when carnivores scavenge at a carcass and you get multiple species at that carcass. And they might fight with each other or they might eat a bit of meat or bone that’s already been contaminated with the saliva from one animal. That is an area where disease can move from one species to another.”

And animals eat one another. Hyenas, for example, may prey on domestic dogs around Serengeti National Park. However, there hasn’t been much evidence the canine distemper virus has affected hyenas much. Sometimes the virus can even pass through a lion population with few if any symptoms.

“It’s a very curious disease. Sometimes it causes outbreaks that are clinically apparent with lots of death and diseased animals. And other times it passes through and you don’t see any symptoms whatsoever,” Lankester said.

The canine distemper, he said, virus now may be established in the wild among several carnivore species rather than the domestic dog population. A big reason for that may be domestic dogs around Serengeti National Park are being vaccinated for distemper, rabies and the parva virus.

“It’s probably reduced the intensity of transmission of the virus into the national park and into lion populations. But what we’re seeing is that it hasn’t prevented the lions from becoming infected completely. And so there is clearly some other transmission going on that the vaccination campaign has not managed to prevent.”

Lankester said evidence of it spreading into other animals can be found in Eastern Russia where Siberian tigers are now becoming infected and dying.

Lankester is a clinical assistant professor at the Paul G. Allen School for Global Animal Health at Washington State University. However, he’s based full time in Arusha, Tanzania. While research continues into canine distemper, he also focuses on rabies, which is widespread in Africa and Asia.

“Rabies is what we call a neglected tropical disease. It’s causing fatalities all around the world. Every year, approximately 69,000 people are dying of rabies. Almost half of those are children under the age of 16. As we all know, it’s a horrific disease. It’s one of the most lethal diseases known to mankind, which means once somebody becomes infected and symptomatic they nearly invariably die,” he said.

He said in Africa and Asia the disease is nearly always transmitted by domestic dogs. It’s entirely preventable with vaccines. Lankester and his colleagues are campaigning for funds to establish national canine vaccination campaigns to eliminate rabies on those continents. In the United States, the rabies reservoir is usually wild animals, such as raccoons and skunks.