Update Required To play the media you will need to either update your browser to a recent version or update your Flash plugin.
By VOA
Jan 14, 2017


From the very beginning of his Administration, addressing climate change has been of one President Barack Obama's top priorities. Looking back today, the Obama Administration's eight year quest to lead global efforts to reduce harmful greenhouse gas emissions has been a historic success.

In December 2015, the world came together to adopt the Paris Agreement on climate change. The Paris Agreement establishes a long-term, durable global framework to set the world on a course to reduce global greenhouse gas emissions and mitigate the most dangerous levels of climate change. International cooperation with China was key to ensuring the success of Paris. The United States and 122 other countries have joined the Paris Agreement, which entered into force in November 2016, faster than all but a handful of international agreements. 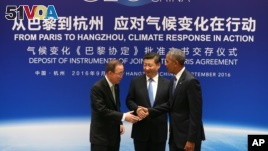 As Secretary of State John Kerry stated: “We have sent a powerful message to governments, to the private sector, to citizens everywhere that we are entering a new era in which reliance on fossil fuels is reduced while greener and cleaner energy carries us forward. And make no mistake – we do not believe that we can shift into reverse or even stop in this endeavor.

“This is a race against time, a race against what is unraveling, in terms of forces of ecosystem and Mother Nature that not everybody completely comprehends in terms of how fast or what may happen, but absolutely comprehends that it presents catastrophic risk to human beings. If we're going to keep faith with future generations, it is imperative for us to keep moving ahead.”