Update Required To play the media you will need to either update your browser to a recent version or update your Flash plugin.
Michael Lipin
October 16,2015


WASHINGTON— The Martian, a film about a marooned astronaut who uses science, wit and courage to survive in a very hostile environment, is making hundreds of millions of dollars and has gotten good reviews.

Some scientists also say the film has the potential to inspire as well entertain.

In The Martian, Mark Watney is a U.S. astronaut who has to survive alone on Mars after his crew leaves the planet without him, thinking he died in a storm that swept him away. 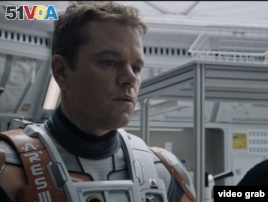 Watney, a botanist, is played by Matt Damon. Not your typical Hollywood here, Damon is one of several role models in the film for aspiring scientists.

It's a performance that excites Costa Rican space enthusiast and student Montserrat Cordero, who appeared on HashtagVOA via Skype.

"Jessica Chastain's character is amazing. We also have the computer programmer who is also a woman. This is not what we tend to see. So I'm really excited to see this kind of thing, hope to see a lot more of it," said Cordero, a Stanford University student.

Cordero is also a graduate of an international summer school run by the Foundation for International Space Education in Houston, Texas.

Justin Kugler, director of educational programs at the Foundation, told HashtagVOA via Skype that The Martian's role models will have a positive influence.

"The more women we have involved in science, technology, engineering and math, the better a society we have, and the better we’ll be able to accomplish those missions and do things like go to Mars," Kugler said.

In the film, NASA, the U.S. government space agency, tries to overcome great obstacles to bring Watney back to Earth.

That's not just science fiction. The science and technology shown in the movie is based on real-life work by NASA, which acted as an adviser to the filmmakers. And that work includes preparations for an actual manned mission to Mars.

As part of that effort, NASA's Jet Propulsion Laboratory has been operating rovers to collect Martian soil samples.

"People who see the world from different angles to come in and bring their creative ideas with them, to come here and to help us out. So what we do here is really, in many respects, an international effort," Manning said.