Update Required To play the media you will need to either update your browser to a recent version or update your Flash plugin.
By VOA
Jan 14, 2018


On the third Monday of each January, Americans honor the memory of the Reverend Doctor Martin Luther King, Jr. Dr. King, a Baptist minister from the southern state of Alabama, was a leader in the U.S. Civil Rights Movement, advocating social change through non-violent means. On January 15th, he would have celebrated his eighty sixth birthday.

Believing that "change does not roll in on the wheels of inevitability, but comes through continuous struggle," Dr. King organized and participated in mass-action boycotts, sit-ins, peaceful marches and other non-violent acts of civil disobedience. 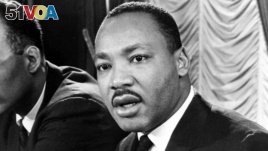 Dr. King once stated that "an individual who breaks a law that conscience tells him is unjust, and who willingly accepts the penalty of imprisonment in order to arouse the conscience of the community over its injustice, is in reality expressing the highest respect for the law." And so, activists sometimes deliberately, but peacefully and respectfully, broke laws aimed at segregating the white citizenry from the non-white, thus hoping to bring attention to the inherent unfairness of such legislation.

Thus, when a black seamstress named Rosa Parks broke the law in Montgomery, Alabama, by refusing to give up her seat on a bus to a white passenger, and subsequently was jailed for her transgression, her plight generated national attention and increasing sympathy for her cause across the country.

Dr. King was thirty nine years old when he died by an assassin's bullet on April 4th, 1968. But his legacy lives on. In the fullness of time, all segregationist laws were repealed, discrimination is a legally punishable – and punished – offence.

Dr. King's life is well summed up in his own words: "The quality, not the longevity, of one's life is what is important."