The U.S.-South Korea alliance grows more important by the day, said U.S. Secretary of Defense Jim Mattis on a recent trip to the Asian nation.

The threat from North Korea has grown markedly over the last year. In the past few months, the regime of Kim Jong-Un has conducted two ICBM tests, launched two intermediate-range ballistic missiles over Japan, and conducted a sixth nuclear test. 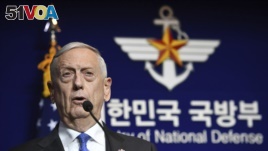 Secretary Mattis underscored “America's priority commitment for a bilateral alliance,” and made clear the United States' full commitment to the United Nations mission for the defense of South Korean democracy, “standing as it does, as a bedrock countering [North Korea's] efforts to destabilize this region and be a threat to the world.”

“Regardless of how North Korea behaves or what actions it takes,” said Secretary Mattis, “we stand with the peace-loving people of the Republic of Korea, our ally that maintains stability on the peninsula and in the region.”

“North Korea should harbor no illusions,” warned Secretary Mattis. While diplomacy remains the preferred course of action, “make no mistake,” he said, “any attack on the United States or our allies will be defeated. Any use of nuclear weapons by the North will be met with a massive military response, effective and overwhelming.”

Due to North Korea's aggressive and destabilizing actions, the U.S. and South Korea have taken defensive steps as an alliance, such as deploying the highly effective THAAD anti-missile system in South Korea.

Around the world, responsible nations have downgraded their relationship with North Korea, expelling their ambassadors and curtailing trade, with the goal of denying the regime the funds it needs to continue developing and fielding its nuclear and missile programs. This has left the regime diplomatically isolated, and has led to growing discontent among the North Korean people.

“We stand shoulder-to-shoulder with. . .the Korean people in confronting the [North Korean] threat,” said Secretary Mattis. “I'm confident we'll continue to be the best hope for a continued prosperity and security of our nations and the region.”