Millennials, Many Burdened By College Debt, Wary of Credit Cards

Update Required To play the media you will need to either update your browser to a recent version or update your Flash plugin.
By Faiza Elmasry
25 August, 2016


Stefanie O'Connell graduated from New York University with a degree in drama and a big debt. With few job opportunities, she became cautious about her finances, that has led her onto a completely different career path, as a financial expert.

Through her wealth management blog, she has discovered that a lot of millennials are just like her.

What O'Connell sees among her blog readers is supported by Federal Reserve data, which indicates the percentage of Americans under 35 who hold credit card debt has fallen to its lowest level since 1989. 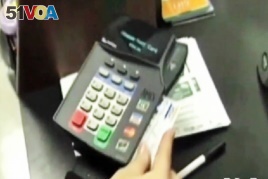 FILE - A credit card is used to pay a bill.

Credit cards are an integral part of the U.S. financial system. Without one, it becomes harder for young people to purchase many goods and services, from a cellphone to an apartment.

"It's critically important for a young person to build credit, to build strong credit,” Levin said. “It doesn't mean that you over credit yourself, but it means that you are wise about your credit, you are a responsible payer, and you don't get yourself in over your head."

Apps like Level Money, also known as the financial GPS, can help young people build credit while living within their means.

The apps serve as an online adviser, helping they make better spending decisions and not go deeper into debt.