Update Required To play the media you will need to either update your browser to a recent version or update your Flash plugin.
By VOA
Apr 4, 2018


April 4th is the United Nations' International Day for Mine Awareness and Assistance in Mine Action. The occasion provides an opportunity for the world to reflect on both the progress made, and the challenges that remain, in clearing landmines and unexploded ordnance, which still endanger civilians in more than 60 states and other areas.

The United States is working closely with partners worldwide to address this serious humanitarian challenge which puts innocent people, including many children, at risk. 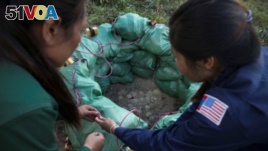 The United States is the world's single largest financial supporter of efforts to address humanitarian hazards from landmines and unexploded ordnance in post-conflict countries, and to reduce the availability of excess, loosely-secured, or otherwise at-risk weapons and munitions.

Since 1993, the United States has invested more than 2.9 billion dollars for the securing and safe disposal of excess small arms, light weapons, and munitions, as well as the safe clearance of landmines and explosive remnants of war in more than 100 countries.

The United States has funded programs worldwide aimed at reducing at-risk weapons and munitions, and at improving stockpile security. The goal is to prevent diversion of arms to terrorists and other destabilizing actors.

Through the conventional weapons destruction program, the U.S. government has collaborated with partner nations and international organizations since 2003 to destroy more than 39,000 excess or poorly-secured man-portable air-defense systems. Also known as MANPADS, these are shoulder-fired missiles that, in the hands of terrorists or insurgents, pose a serious potential threat to global aviation.

Proactive community outreach through our Mine Risk Education programs have prevented countless injuries. At the same time, U.S.-funded Survivor Assistance has provided essential medical and rehabilitation services to more than 250,000 people injured by landmines and unexploded ordnance.

Working in close cooperation with the Department of Defense and the U.S. Agency for International Development's Leahy War Victims Fund, the Department of State has helped numerous countries to declare themselves mine free.

On this day of mine awareness, we urge other nations to join us in a robust international partnership with the shared goal of reducing the impact of landmines around the world.